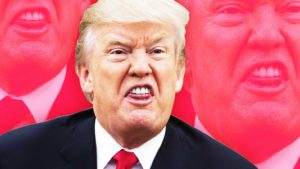 Trump has a habit of calling intelligent women this one word: nasty. According to the Merriam-Webster Dictionary, the word nasty is defined as something that is disgustingly filthy, physically repugnant, indecent, or mean. But why would Trump refer to women with a term that is not only harsh but is also untrue? Certainly, the women whom Trump has referred to as being nasty are not disgustingly filthy or physically repugnant, nor are they indecent or mean. But what each of these women possesses are the very things that Trump lacks.

In 2016, during his run for the presidency, Trump referred to presidential candidate Hillary Clinton, who not only has served as Secretary of State, as a Senator, and as First Lady of the United States, as being a “nasty woman” during their final presidential debate. Hillary Clinton went on to answer her debate question without stooping to Trump’s level of infantile insults and interruptions.

In 2017, Carmen Yulin Cruz, the mayor of San Juan, Puerto Rico, who has also served in the House of Representatives of Puerto Rico, was accused by Trump of being “nasty” to him because the Democrats told her to do so. In response, she wore a T-shirt during an interview with UNIVISION, featuring the word “NASTY” written across the front.

In 2019, Trump called the Prime Minister of Denmark, Mette Frederiksen, “nasty” after she said that Trump’s idea of buying Greenland was “absurd”. He has called House Speaker Nancy Pelosi, “nasty” for expressing her views on Trump going to prison. Trump has called the Duchess of Sussex, Meghan Markle, “nasty” after she called him “misogynistic” and “divisive” before his election win in 2016. Trump has referred to female reporters such as PBS reporter Yamiche Alcindor as being “nasty” for asking questions he did not like. And most recently, Trump called Senator Kamala Harris, who is presidential candidate Joe Biden’s running mate for Vice President, “nasty”.

These women are smart, respectful, and accomplished. So why does Trump insist on calling them nasty? Since 2016, Trump has been an incompetent leader, disrespectful to both men and women, and he certainly is not as accomplished as he pretends to be. Moreover, Trump is also a misogynist. And the definition of a misogynist is someone who has a strong dislike of women. In Trump’s case, his problem is not that he dislikes all women. What Trump expresses is a strong dislike for intelligent women who are not afraid to disagree with and challenge him.

Trump has no problem with publicly shaming women who do not act the way that he wants them to. And as the President of the United States, he should not only set the example for respect and decency in America, we should also hold him to a much higher standard. I have one daughter who I hope to raise to be a strong, outspoken woman who is not afraid to disagree with others respectfully. And I expect the men she meets at the workplace and certainly at the White House, to speak to her and treat her with the utmost respect that each person deserves. And I would expect my daughter to not accept the disrespect Trump has shown to so many women who disagree with him.

So why not call Trump a sexist President too? A sexist by definition is a person who shows prejudice and discrimination against women. While Trump has a habit of calling women “nasty” and other derogatory words, he has employed women such as Kayleigh McEnany as the White House Press Secretary, Kellyann Conway as Counselor to the President, Gina Haspel as the Director of the CIA, Betsy DeVos as Secretary of Education, Elaine Chao as Secretary of Transportation, and even Ivanka Trump as Advisor to the President, none of the President’s inner cabinet positions are held by women.

Trump seems to think that by hiring these women it proves that Trump is for women. But this could not be further from the Truth. If Trump were truly for women, his policies and his words would reflect this. Moreover, he would not just address suburban women, and essentially suburban white women as being “suburban housewives” whom he will protect from “low-income housing that could invade their neighborhoods”.

While words themselves cannot necessarily hurt women or men, they can set the tone for how we treat each other. And if the tone coming out of the White House is one that promotes disrespect and hateful behavior, if Americans have become so numb to Trump’s constant insults and immature behavior, we may forget that his words and actions have an effect on the young men and women who watch him during press conferences and interviews. Young men may think it is okay to speak to a woman the way Trump has spoken to some, because she is outspoken. Insulting and disrespectful behavior have no place in any work environment and should never be within our government.

So, are you, by Trump’s definition “nasty”? There are many intelligent, respectful, talented and accomplished women in our country. And while I am certain that many women including myself, would proudly wear the title of “nasty” as Trump defines the word, we must demand better from our President.