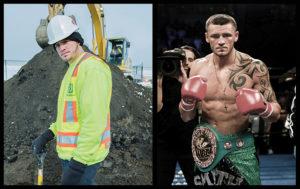 Just over a month ago, light heavyweight contender Joe “The Beast” Smith, Jr. took a few moments out of his training regimen to discuss his upcoming bout with Eleider Alvarez with me. The Long Island, New York boxer took the fight to Alvarez on August 22 inside “The Bubble” at the MGM Grand in Las Vegas by way of a resounding as well as resonating ninth round stoppage victory. A right cross ended the night for his Colombian adversary, who himself had ridden an eccentric wave of success up through early last year with wins over such names as Lucien Bute, Jean Pascal and Sergey Kovalev. Less than half a minute into round nine in his showdown with Alvarez, which was billed by its promoters as, “It’s On!”, Joe connected with a solid right to the chin, which sent his opponent fuddling backwards, first into and then through the ropes.

He tried to beat the count, yet it was clear to referee Tony Weeks that he was a beaten man who could no longer continue. Fans of Joe Smith, Jr. may have seen the abrupt knockout and immediately had flashbacks to what he had done to the legendary Bernard Hopkins nearly four years ago. That December night in 2016, the one-time construction worker for the Laborers Local 66 Union back in Long Island sent the all-time great through the ropes, then onto the floor and ultimately into retirement. Earlier this week, Joe, 26-3, 21 KO’s, was once again gracious enough to take a breather from his gym time to chat with me about how it all went down in Sin City last month and what he has on the docket in terms of upcoming bouts.

ML: Hi, Joe and thanks for talking with me again. First off, congratulations on the big win on the 22nd. What were the next 24 hours or so like for you after such a great result?

“Well, I basically just relaxed and enjoyed the win. We all went out to dinner that night, my team and I.”

ML: You did really well, so at what point did you think to yourself, “I have this guy!”?

“Actually, that never happened. In the first round, I felt like I was in control and that it was going to be my night. In the fifth, I hit him with a lot of good shots. I thought that was going to finish him, but he was able to make it through. After that, I felt that maybe I wasn’t going to be able to get him out of there and I expected the fight to go the distance. But then I hit him with a jab right as the ninth round began and I could see that his legs had given out. I caught him with that right and he went through the ropes, just like (Bernard) Hopkins did, but he was able to stay in the ring.”

ML: You knew then, though that you had it won?

“Yes and if we had been in the center of the ring, then he would’ve ended up a lot more injured. I think the ropes saved him, in a way. They stopped his fall and then, he fell through.”

“Whoever and whatever they can make happen. I want to win the belt and then unify the division. (Sergey) Kovalev would be a great opportunity and a big name opponent. A win like that under my belt would be very good for me, so either he or (Artur) Beterbiev.”

ML: It’s been interesting to see how this has all played out over the last few years. You knocked out the guy who had knocked out Sergey Kovalev two years ago. Kovalev was once the fighter that no one wanted to face and was among the most feared in the sport. He’s since also been knocked out by Canelo Alvarez, who held onto the WBO light heavyweight belt for what seemed like a few seconds before he vacated it and went back down. What did you think of that fight last November?

“I thought that Kovalev was moving around well, but that he wasn’t really sitting down on his shots. It was like something was missing and I was surprised that he went out the way he did.”

ML: That being said, would you welcome a bout with Canelo?

“Well, Canelo knew who he was fighting and that he couldn’t beat the other champions in the division. He took a shot at it and left, so when I win the WBO belt, he can come back up and fight me for it.”

ML: So, once you got back home, did you get right back to work or did you hang low for a while?

“No, I went back to work. I’m actually just getting to the gym now. I’m just trying to maintain what I’ve done and I’m not killing myself in any way. I don’t walk around any heavier than 195 (pounds) and I don’t think I could put on a crazy amount of weight, even if I tried.”

ML: Well, Joe, thanks again. I’ll let you get back to training, but before I do, are there any final comments you’d like to add?

“Well, I’m hoping for another great fight and you should see me back in the ring within 120 days of October 23rd.”