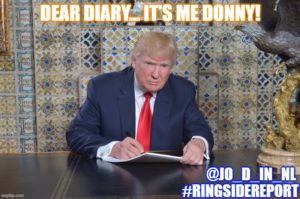 Hey big guy, it’s me again, you know, Donny. Anyway, the past few days have been so horrible for me, everytime I turn around I see them continuing that stupid practical joke, the one where they are pretending that Sleepy Joe won the election over me, as if.

Like that could ever happen, imagine what it would be like if he won. He would totally change all the great things I have done since I became the president, we both know that he would do that in a heartbeat.

It’s all because he’s totally jealous of me, right. After all, I am the best, smartest, most handsome and greatest president that this country has ever had. You know, they should be saying thank you for the fact that they were and are lucky enough to have me as the person running their country.

God knows, that Sleepy Joe and Nasty Kamala will never be able to do what I have done for the past four years. For sure, no one will argue with that. Anyway, I am totally sick and tired of this stupid joke, it’s been too long, they need to give it up, because it’s really starting to get old, like Sleepy Joe, hee hee.

I mean, do the fake news and the other side really expect anyone who supports me to believe that somehow he managed to beat me, in both the popular vote and get the votes from the Electoral College, I think that’s what it’s called; like that would ever happen, I mean, why would it?

Everyone loves me and the job I have been doing, so why would they want to vote for him instead of me. The only good news I have heard in the past few days is about the Pfizer vaccine results, answer me something, why is there a P in that name, you don’t hear it, right?

Back to the point, at least if there is a vaccine, people will stop complaining about that stupid virus, Covid, and give me a break. Seriously, what do they expect me to do about it? Yeah, some people have died, but like I said, it could have been over 2 million people, but do they look at it like that?

No, they don’t! All they keep going on about is how many people have died, I mean it’s only been about 250,000, it could have been so much worse, right? I will be so glad when that vaccine is out, and it will make them leave me alone.

Hey, buddy, thanks for letting me rant a bit, I feel so much better now. It’s been so hard on me, but no one ever sees it that way. This is a hard job, you know, and I have been working so hard at taking care of everything; never getting any thanks for all the stuff I have done for this place.

Well, back to the office, and those lawsuits to overturn all those illegal votes, can you believe that they think it’s fair to count ballots that were cast after the day of the election, isn’t that insane.

Bye for now, love you, and I’ll talk to you later.