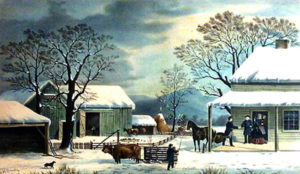 If you are looking to celebrate Thanksgiving like The Pilgrims, you might be sorely disappointed. Thanksgiving for Pilgrims were days of fasting, prayer, and praise. Personally, a Pilgrim Thanksgiving is exactly what I want to cook up.

There were no mashed potatoes – potatoes hadn’t come to New England yet. So, no cleaning and peeling and boiling. There was probably not turkey as it did not become a popular meat for another two centuries. So, no feeling guilty for forgetting to take the turkey out to thaw, no hours and hours of cook time, no stuffing breading up a turkey butt, and no struggling to make gravy without lumps.

The only thing we know was served was venison – or deer meat for you urbanites – and that was probably brought by the neighboring Wampanoag tribe. I’m more than happy to have guests provide the main course.

The very first Thanksgiving in 1621 more closely resembled a traditional English harvest feast. English harvest feasts had food, dancing, and games. Rather than the feisty games of Euchre my family typically looks forward to, the Pilgrims and Wampanoags took turns showing off their skills in archery and musketry. Fun. The dancing was probably pretty risqué for its time, I’ll be twerking to Gas Pedal in their honor this year.

Thanksgiving as we know it didn’t become a “thing” until after the Civil War. A woman – Sarah Josepha Hale – launched a campaign for an annual celebration to improve public harmony. In the wake of the most horrific of American traumas thus far, something had to bring us together. President Lincoln decreed the last Thursday of November as a day of national day of thanksgiving. This was around the time of the anniversary of the Pilgrims arrival at Plymouth. Since then it was moved to the third Thursday in November to give retailers a longer Christmas shopping season. That’s Capitalism Baby.

So, skip the mashed potatoes, the turkey, the stuffing…. And tell your family and friends to bring their guns and a deer… And have yourselves a Merry prequel to Christmas shopping this year.

– In all seriousness, stay home and stay safe. Thanksgiving can occur any time of the year. I suggest waiting until January 20th if we can flatten the curve.