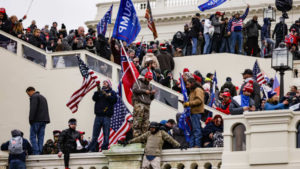 Today is a dark day in American history. One I am not proud of, more so ashamed and embarrassed. One of the glorifications of our reputation as a country is the civilized freedoms portrayed by our citizens free of chaos and anarchy. We have recently taken a dive to the depths of hell to our reputation around the world. The last 4 years have had it’s embarrassments of a no good con man who really should not have been in politics. A failure in the business world, a true house of cards. Then as the pressure started piling on, including an impeachment, his ability to lead a nation brought out his true ineptness to handle his role as our nation’s highest ranking government official.

The continuing downward spiral from the handling of a pandemic that has kneecapped our country, to building falsities in conspiracy led paranoia propaganda, he drew a stronger divide to our country than ever before. Throw the election loss and continuing attempts to undermine the voices of the American people for his failures as president and the loss that would follow, the climate of our country from neighbor to neighbor has been nothing short of disturbing and tense.

The day started off promising. Senate control seemed to be leaning to the Democrats as the Blue Wave crushed the Republican Incumbent Senators in Georgia, noting victory for the Democratic challengers in now Senator Elect Warnock and Ossoff. Those victories will indeed continue to be acknowledged, but the celebrations were short lived.

Lame Duck Dickbag Donald Trump participated in a rally in Washington DC where the notion of “Stop the Steal” quickly became “Take our Country Back.” The delusional Trump encouraged his MAGAts to take the capitol building on the day that Congress was to ratify the election results for President Elect Biden. The safety and well being of many were compromised. Turbulent acts driven by the brainwashed radical right were encouraged by Trump and carried out by the pack of losers that follow.

Pictures of what look to be rioters protesting in army like fatigues mobbed the capitol, made their way to sacred corners of the building and there is even photo proof of artifacts like podiums being stolen.

I am deeply ashamed of the actions taken by people I should be calling my fellow Americans. Yet, I am not surprised. This is the hypocritical nonsense the radical right would pull after years of damning the Black Lives Matter movement. The problem is, they do not understand BLM, they fail to separate the riots from the actual constitutionally accepted protests during these times. The maskless thugs that took the capitol building today are no better than any other lunatic criminal.

Justice needs to be served swiftly and effectively. These thugs committed treason and sedition all at the orders of a delusional diaper wearing mad man. We have transition processes, but a deliberate act like this should be invokable to remove Trump immediately from office. The fact that he will be pardoned in some way shape or form is disgusting, he should be dealt with like any other traitor.