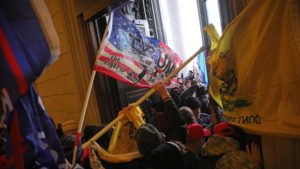 As the title suggests, I am a Canadian who’s looking at what’s happening to the United States from the outside. Everyone knows that we are only divided by the borders between our countries.

However, the difference in styles of leadership is as far apart as you can get; which over the 4 years of Donald Trump’s only term, thankfully, has truly been emphasized.

Hal Sparks
@HalSparks ·3h Fuck You, You Murderous Twerp. Resign and spend the rest of your life cleaning the Sicknick families toilets with your tongue. You bitter, weak kneed, flaccid simp. @DrPaulGosar aided and supported an enemy attack.

Paul Gosar @DrPaulGosar
Biden should concede. I want his concession on my desk tomorrow morning. Don’t make me come over there. #StopTheSteaI2021 @ali
1:35 PM · Jan 6, 2021·Twitter for iPhone 974 Retweets 711 Quote Tweets 3.5K Likes
To be honest, before this tweet I had never heard of Paul Gosar, so I looked at his profile to see who he was. At first, honestly, he just sounded like an unknown blowhard who was probably looking for some publicity.

That he was trying to get more notice by posting about the rally that Trump had earlier that day, where he once again repeated his baseless and completely false claims of election fraud.

However, my interest was raised when I noticed the date and time of the tweet, which was before the domestic terrorists attacked the Capitol Building after they were incited to commit insurrection thanks to Trump and his bully boys who went out of their way to rile up the pro Trump supporters who were at the rally earlier that day.

During this insurrection by the domestic terrorists on that fateful day, many people were injured, and as of this time, at least 5 people have died as a result of the terrorists trying to take over the Capitol Building to stop the lawful certification of the Electoral College votes.

The sad and scary thing is that it is well known that there is no proof of widespread voter or election fraud; unlike all the public and taped examples of Trump continuously lying time and again of how the election had been stolen from him.

Interestingly, not once did he ever produce any of the so-called proof that he kept saying that he would prove that he had actually won the election; as well, not once since the election had he or any of his so-called legal team actually ever given anyone this proof.

This did not happen, even when they went to court, where out of more than 60 cases, almost 100 percent of them were dismissed; even those that went to the Supreme Court of the United States, their highest level of justice.

The sad thing is that all of this has happened because of the fact that Donald Trump, the sad pathetic loser of a man couldn’t and still can’t accept the fact that he lost the Nov. 3, 2020 election.

Now, this is just my opinion, but I actually believe that he knew it was likely he was going to lose, that is why he started talking about how if he did it, that the election would have to have been rigged.

Trump has over the years tapped into some part of the American culture that lead to him becoming like a cult leader to all the pro Trump supporters, by giving them permission to be as racist, prejudiced, homophobic and any other type of bigotry they want to openly show.

As he himself has done repeatedly, starting with the birther issue of President Obama, he began to drive a wedge between different sections of the US population, turning family and friends on each other.

He has always been horrible, but over the length of the 2020 election time and definitely after his loss in November, he ramped his deceit and dishonesty up to an unbelievable degree through the repetition and frequency of his baseless lies, which resulted in the events of January 6, 2021.

The domestic terrorists, who have been indoctrinated by Trump for over 5 years, to the point that they cannot recognize logic or the truth anymore; they have let themselves be led by their cult leader, and this has led to the actions which have shaken but not broken the heart of American democracy.

While not only have the “common folk” been led to this point by Trump, because many of the Congress and Senate members are also completely loyal to their leader, but perhaps not for the same reason.

In the case of some of the Republican congress members and senate members have been backing the lies and delusional beliefs of the president; this has a secondary reason, because some such as Hawley and Cruz, who even after the riot still stood up to object to the Electoral College vote certification.

If this is indeed true, it is horrific that their greed for power, same as Trump had since the beginning and still has, have led to the event that have led to the deaths of five people during and after the insurrection at the Capitol Building.

Perhaps even the politician Gosar, are hoping to use the events of the past few months as a way to draw Trump’s followers to their own bases, to help them further their political ambitions.

There is one question I want to raise, and right now, it is only a suspicion, but look at who is listed in the tweet by Paul Gosar, it is @ali, whose account has been suspended.

I want to know, is it the same Ali who has been interviewed on television stating that he was one of the organizers of the rally for January 6, which is where many of the rioters came from.

He also stated that he was working with three politicians as stated in the article by Will Sommer updated Jan. 10, 2021 9:40PM ET, published Jan. 10, 2021 9:08PM ET. Alexander claimed in a video, he had some organizing assistance from pro-Trump Reps. Paul Gosar (R-AZ), Andy Biggs (R-AZ), and Mo Brooks (R-AL). While Ali Alexander has alleged this, I do not have proof, but I would love to see this investigated.

I sincerely hope so, because I believe that it can be the beginning of the healing that the US has gone through after this week.

My main wish for the US is that your country can come back to the glory it so richly deserves once again. My hope is that as of January 20th of this year, with the inauguration of Joe Biden and Kamala Harris, that things are going to change for the better.

That you, the people of the US, will be able to start repairing the massive division that the term of Donald Trump has created in the United States of America. Most of all, I pray that all of you will never have to deal with anyone like that ever again, and never have to see your country torn apart in such a way ever again.

Well, signing off from here in Canada, wishing all of my American friends the best, and much love, especially after this last week.