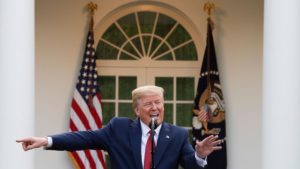 The clock strikes midnight, and all is quiet.

Tuesday the 19th January 2021… Two people sit for the last time in the Not So Oval Office.

Orange Aide and Agent Orange are sat with champagne. They each have filled glasses and they are smiling.

We are not sure who, as they both smile at the window out of which he and they had watched so much discord and disunity.

They have clinked their glasses and they have smiled for their futures are no longer Orange.

Just at that point they hear, from a far distant corner, a noise. It is the opening and shutting of a door. Mr. Trump, for it is he, has climbed into a cupboard. Thinking it was the stairwell to the back exit, not for the first time, he makes a mistake. In the darkness he sits down to contemplate what to do next. In the darkness he sees nothing. He realises nothing and the world sighs a massive sigh.

The nightmare is over – isn’t it?

Whilst the author asserts his right to this as an almost original tale, any similarities to persons real or imagined are deliberate. However as there is little or no evidence that Mr. Donald J Trump has ever hid in a cupboard, as far as he is aware, this is clearly fictional and never actually happened.

On the 20th January 2021, the man who won the US Presidential contest will be sworn in as President of the United States of America.