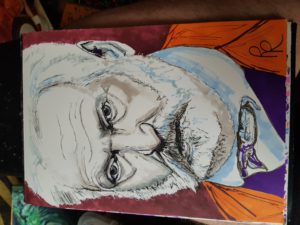 I remember Dorothy Parker saying that she hated writing but loved having written. That is a sentiment I absolutely concur with. What I’ve learned recently is just how little I actually enjoy writing.

It’s not always been that way. At one time as a young academic I toiled away at keyboards wrestling with complex ideas, loving the challenge and the internal combat. I recall that surge of pleasure when a phrase turned itself after a long battle, or an idea was finally given form.

And I spent a lot of time trying to convince undergraduates and postgraduates how fun writing was. I would offer them advice about how to undertake it, both physically and mentally. How many times I prodded them towards the Chesterton approach of set hours? Many. Writing religiously between 9am and 1pm or whatever worked for them.

But these days I don’t have the will, much less the discipline. Staring at the blank screen there is no frisson, no anticipation of the article to come. Now, there is the sense of having to do it, that writing prose is a turgid chore. No excitement, no real pleasure.

And I blame academia for that. The pressure to write even when you have nothing to say was unbearable. It’s only four six to eight thousand word peer-reviewed articles in a four year period, colleagues would remind themselves with false cheer. Well, perhaps three and a book…

Except that the pressure to write four or five star papers grew and grew. Then that wasn’t enough, you had to be bringing in research grants, and not just any grants but prestigious ones.

It’s no surprise to me now that i have little love left for writing. Academia forced me to keep writing, to keep churning out words with no mind or meaning.

It isn’t all writing though, I adore writing poetry. The freedom of expression combined with the subtle rules and rhythms intoxicates me. That frisson is still very much alive.

But for me now, it’s art. Drawing and painting, that’s how I will predominantly convey my feelings and beliefs. Which isn’t to say I won’t continue to write, it’s just that I cannot allow it to become a grind ever again, and I refuse to speak when I truly have nothing to say….

span style=”color: #808000;”>Radical Rhymes is a professional artist working with a range of media – predominantly animal/human portraits and landscapes – including, most recently, hand painted furniture. You can see his work on Instagram Radicalrhymes1969 or on Twitter @RhymesRadical.