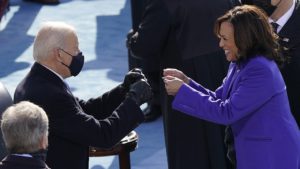 January 6th, 2021 was a very eye opening day in this country. It was like the straw that broke the camel’s back in many ways. The turmoil led to confusion, anger, and a fear that struck many leading to disappointment.

In just two short weeks, the whole morale of the nation visibly changed. On January 20th, 2021, we watched President Elect Joe Biden be sworn in as our 46th President of the United States, along with our first woman and African American/Southeast Asian Vice President in Kamala Harris. The day felt like it took forever to get here from the day President Biden was formally announced as the winner of the election in November, but it was clear, it has been over 4 years we have been waiting for this day.

The last four years had been filled with lies leading to a strong distrust in the government for many. Sadly, it also led to further hatred and combatted feelings towards each party of our bi-partisan structure. Fear and paranoia messages aligned to an extreme and radical vision of what America could become and what it should be from the top down. Placing distrust in the people on what was real as reported through news sources was the attack tactic, repeating the lies was the strategy.

But President Biden seemed to instantaneously change the tone. Bringing one of the most captivating inauguration speeches I have heard in my lifetime, applying direct relevance to the depths we are in to the hope of the heights we can reach as a country with one significant word: UNITY.

If we want to heal where we currently are, we need to come together and row the boat in the same direction. The feeling President Biden delivered was of a similar perception I had back in 2009 when President Obama was sworn in, and that was hopeful. With President Obama, we saw progress, we saw clear representation of all of our citizens getting a say in how our country is ran. This week, we saw similar progress with the swearing in of VP Harris from a social perspective, and furthermore, we saw an enthusiastic optimism that there is nothing we cannot achieve as we look forward.

The affect to me personally was immediate. I was so excited waking up to a loser like Donald Trump leaving the White House and heading to Florida. I really contemplated sharing my scathing thoughts to someone so negative and so intentionally self-centered. He exited in shame in the similar style Isaiah Thomas and the Detroit Pistons did when the Chicago Bulls dethroned them in the 1990 playoffs. Just walked off the court and ignored recognition of respect to the future champs. This classless act turned my stomach, but as most of us gave Trump as single finger salute to him and his grifter children as they ungraciously left in Air Force 1, I realized this day was not about him. Why give him the satisfaction for ruining another day of mine with his garbage.

The battle from the election was nothing short of tumultuous. Like 2016, it got personal from Trump. President Biden did not take personal low blows throughout that, keeping class and respect throughout, and on this day, he chose to make his schedule as to not draw conflict with the departure of the disgraced failure of an ex-president.

In fact, the only self-gratification I felt President Biden reflected on was the pride he had for his family, but most of all, the pride he feels for the honor to serve the people of this great nation. His speech made very clear he is not there to lead solely for the people who voted for him, but also the people who did not. In fact, he openly asked for those latter citizens to give him a chance. Listen. Very reminiscent of a President Kennedy notion of not having others do for you, but you do for others. He is openly willing to see the full scale of all views and act accordingly with what is best for the nation. Seems like simple politics, and maybe the joy of Cheeto Man’s departure has me slightly drunk on common sense, but it was so refreshing to hear a concept of one America as opposed to Americans against the “Radical Left.”

President Biden has a long road ahead of him. Though we have seen some splintering in the GOP, and several factions of misinformation driven Trump supporters opening turning on him but maintaining their hate for the rest of the country. Despite the ability to reason, President Biden is going to run into instances of the unreasonable. Some out there will not grant him that chance. Many hypocritically already claiming that Biden is not their President, even after damning those who said the same thing of Deadly Donnie 4 years ago. Typical uneducated morons flooding social media with condemnation of the immediate executive orders President Biden signed. Most specifically the halt of construction on Trump’s wall along the Mexican border, and the stopping of work along the Keystone Pipeline. Immigration will always be a hot topic with mixed solutions to the actions of each ideology, but the exaggerated blasting of how President Biden is already making our country less safe is nonsense…apparently some members of the right have a short memory of the events of January 6th. However, the bigger focus from the right comes from the loss of jobs coming to 42k people working on the Keystone Pipeline tied to rejoining the Paris Climate Agreement. While I see some of the concerns, they are missing the bigger picture.

For one, ideologically speaking, democrats typically lean towards caring for the earth we inhabit. When you take this to the Paris Climate Agreement, you need to see the big picture as this being another step to repairing the clearly fractured relationships Trump caused with allies around the world. The next step is re-entering the Nuclear Arms Agreement with Iran. What I see here is a foundation for the next four years (hopefully 8 at this point). Repair everything. We need to fix our diplomacy around the world, but what is being failed to be covered is the clear agenda that President Biden also must help repair our own internal diplomacy. The Blue Wave proved that the power is in the numbers. From fighting the virus to fighting hate and rejuvenating this nation, “we’ll lead, not merely by the example of our power, but by the power of our example.”

Godspeed Mr. President, I am betting on you to lead us out of the Trumpian depths of hell and to the free promised land this country can be.