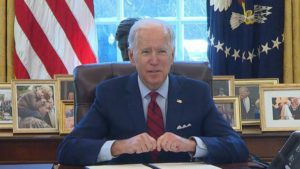 President Biden has been in office for nearly two weeks and has made decisions in signing executive orders that impact many areas of our nation including oil and resources, working on civil matters including addressing white supremacy and most important attacking the COVID Pandemic.

It has been relatively refreshing to have even news coverage not seem combative with every little thing done by President Biden. Clear and concise explanations and reasoning behind logical actions is not something we have been used to over the past four years.

Despite the obvious competence displayed by the current administration, the once deemed silent majority has done everything they can to become not so silent. The hatred has continued to flow through social media platforms, indicating a clear resistance to President Biden’s vision of working on unity as a nation.

We have seen some improvements as it seems in Congress. It seems like there is a more ample image of working together at more powerful levels of congress. I am not indicating it looks like members of congress are magically united now, but the appearance of an open-minded perspective in not just blindly resisting working together is present. While there are still disagreements and differences in approaches and ideologies, it seems to be the first time I seem relatively hopeful in many years the government may work together, for us, to find a way towards a better nation.

I express this even with the clear picture that the Democratic led second impeachment of Donald Trump is highly unlikely to succeed with all but 5 Republican Senators moving against the motion. I congratulate the 5 in favor of completing the impeachment as understanding the implications as to why the process needs to move forward, but also why it should succeed. I still condemn those who throw claims out that are unjust and purposefully leading claims of misinformation as to the constitutionality of these upcoming proceedings.

The bottom line is the Republican Party is at a crossroads. It is splintered and trying to regain and identity for itself. I would argue the first step in fixing that identity crisis and repair itself is to immediately dissolve loyalties to Donald Trump. The sooner he is out of the picture as a figure of any importance to anyone, the quicker the nation can repair, along with the GOP.

Corporate led censorship was a start by keeping him out of the mass public eye, but the misguided foolishness of claiming the traditional and regressed outlook of the structure of America is still at risk. The key here is to remove those who are still encourage a notion of “Trumpism.” I understand a conflict in ideology, and can even gain perception of an opposing ideology. However, the further citizens get down the paranoia and victim hole, the harder it will be to pull it all back together.
The issue still remains the multitude of ideologies in America that do not perfectly align with the two-party system. There are proud members of the Republican Party who hold a more traditional ideology on voting topics yet have a disgust with what Trump brought to reality. I get it. Taxes are an impact on people and the concept of equality on how the government acts and supports it’s citizens becomes the battle. The truth is there are many conservative ideologies I believe in and frankly believe they would be better for me and my family. The problem with those beliefs is that they do not benefit a country in which the poorest citizen has the same rights as the richest.

That has always been my fundamental thought process on why to not vote Republican. The opportunity becomes more limited for a larger audience, though, there are groups that may flourish in a Republican led nation. The irony comes in the hypocrisy. There are plenty of significantly pro-right agenda, but have no qualms benefitting off of democratic policies. Too much misunderstanding on policies like around gun control and perceptions of atheistic beliefs on the world, when the truths are no one is coming to take our guns and one can be religious but understand the separation of church and state to allow for people to have the choice to make decisions for themselves in cases like abortion.

The second Trump is out of the limelight, the more we can find an effective way to repair the misconceptions of concepts that left ideology versus right ideology is not good versus evil. Disagreements can happen. We have to consider the views of every citizen and squeeze them into two caucuses. With that I align directly with President Biden, “That’s Democracy!”