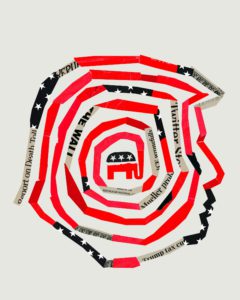 As the old expression went, “it’s all over but the shouting,” which, ordinarily, would be true, but these are neither ordinary times nor are the actors (a legal term used outside of the theater to include any person or persons if plural who are involved in an incident, occurrence or discussion) who behaved in a manner whereby they could be referred to as numbskulls, nitwits, morons, half-wits and/or complete idiots, were and are, for the most part and certainly overwhelmingly, known as “Republicans,” synonyms for which that have come into more common use being “Repukenacans” or “Rethugnacans.”

For the entire presidency of Herr Trumpler, the Republican Party was portrayed (because in actuality, it was) as a bunch of thoughtless, mindless, hateful, hate filled bigots, racists and “Trumpers” to the point that the party’s blindly following of that vile, vicious, misogynistic, corrupt bourvon (a word from either French or German, possibly a Yiddishism, which refers to individuals with a complete lack of refinement, eloquence, elegance, social graces or character in general) has brought a new phrase into use: those individuals—the Trumpers—have unquestionably become members of the Hitlerian Trumpite Cult.

For those who are concerned that the above commentary could be libelous (libel is the written form of defamation while slander is the spoken form), the answer is, “you are wrong, defamation breath!” (Johnny to Ed on “the Tonight Show With Johnny Carson”)

It should be noted that the Supreme Court of the United States has ruled, on at least eight occasions, that the rules of defamation are completely different for private individuals as opposed to public figures and that the only time that a public figure can be defamed, either in the written or spoken form, is when and/or if he or she is falsely accused of a crime, the operative word there obviously being “falsely.”

While I will leave it to our erudite and knowledgeable readers to decide how many crimes have been committed (and by whom) in and by the Rethugnacan Party, I will state clearly and without fear of rebuttal, that nothing written above—nothing—even comes near being defamatory. In other words, I am not accusing the former occupant of the White House or any sycophant member of the Repukenacan Party of a crime: that delightful and well deserved repudiation of so much of what they did to try to destroy this country will come from the various prosecutorial agencies, and indeed, my friends, come it will.

Obviously, every person in an elected office is a public figure as is every commentator on television as well as every print journalist, which means that a person who is a public figure has neither legal recourse nor redress because another member of the public calls him or her a name. Now, though, and in the next paragraph, I will clarify.

In no case above is it stated that any person, including the low grade, venomous, treacherous snake and scorpion who occupied the White House before Mr. Biden, has committed a crime. As noted previously, whether he did or did not, that is, as the great line goes, “not for me to say,” but I am certain that numerous investigative agencies which look into such aberrant behaviors as were exhibited and manifested by the Rethugnacans in the White House and in Congress will, absolute and positively, find the individuals in question to be fodder for those agencies delving into said behaviors.

“So, Henry, are you saying (writing) that I can call a politician a name and not fear a defamation lawsuit in reprisal?”

The answer, to no small extent is yes, but within limits. For example, because you don’t like a particular political figure, it would not be advisable for you to call him (a male) a whore monger or her (a female) a loose woman. Yes, you may refer to him or her as a lowlife or a jerk or an unreliable creep, but if you refer to somebody as a thief or a liar, you must remember that those words might be construed as referring to said individual so derogatorily that he or she might demand that you present proof of said accusations and then, if you fail to do so, could, possibly take legal action. But that takes us well off point, which is, given the hideously aberrant behavior(s) of the former president and many of his sycophants, including certain family members, you may refer to that person or those people in any manner you wish, so long as you refrain from falsely accusing him or her or a crime.

In finality, then, we simply ask, what didn’t certain people totally without qualifications to hold the position they held, in the totally without shame and utterly shameful immediately past administration, do that wasn’t unethical, illegal, immoral or in some other way, shape or form, with total and complete disregard for the laws of this country and its various governmental entities?

Until next time, dear readers, I leave it to you to consider all or as much of the above as you care to. Until then, ladies and gentlemen, please remember that the current Trump-induced horror is far from over and I ask that you remain both vigilant and cautious, get your shots and please, wear your masks.