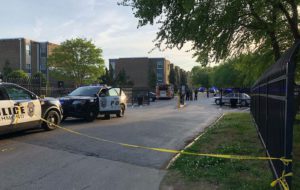 On Tuesday, April 27th gunfire erupted in the courtyard of the Bell Atlantic Apts in Richmond, VA. Filled with women and children playing, 30 year old Shamez Hill and her three month old daughter were caught in the crossfire and killed. Hill died at the scene, her daughter died at the hospital. A gunshot wound to the stomach. Three unidentified victims, ages 11-29, were taken to the hospital.

No one knows what precipitated the shooting, or why. Why anyone would shoot into an area filled with children.

On the same day, a 14 year old was charged with the felony murder in the shooting of 15 year old high school freshman Jaywan Riley over two weeks earlier. There is no known motive for either of the two shootings, which both happened in South Richmond. But one thing is certain, neither should have happened.