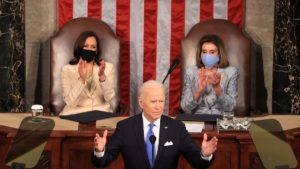 The last hundred plus days or so have had immense emotions for many of us. Tensions involving race, politics and the pandemic have continuously been in the spotlight, or limelight if you will.

Yea, President Biden did his State of the Union after the first 100 days in office, and it outlined some very positive visions of a roadmap he is trying to get buy in on to help reunite the United States from different areas. You can watch the news or re-watch his address for those specifics mainly because I will not be able to do justice to what he is envisioning.

Like most media now a days, I have zero faith in the information provided to me beyond the who, what, where and when. I know, very Trumpy of me. It is not because I think in terms of fake news, but rather the eyes and ears test compared from what I see and hear every day in real life against the agenda of the news source. It is my diligence to determine my own “why” as we continue forward.

The truth is, I believe there are multiple ways to skin a cat. I believe balance is important in our nation. Debating facts is ridiculous in my opinion. Debating that Joe Biden is the POTUS is a lose lose situation when communicating with someone who has fallen down the Q hole. But debating the best conceptual way to run a country is open season with me as long as it doesn’t get personal or down rabbit holes that lead to the Matrix that doesn’t exist. I believe in the first 100 days we have seen positives and negatives from the new administration. I am going beyond words that could be interpreted in different contexts, which is what the news will tend to do, causing the tensions to those who already have no faith in anyone but Q.

The first 100 days has brought the fact of attempting to streamline the execution of deploying the COVID 19 vaccine. Some states have done better than others, but inventory is not the problem we thought we would have after Trump’s failed negotiation tactic and attempt to strong arm the manufacturers in his final months. The curve has shown significant flattening, which should be obvious when a vaccine is deployed. Medically speaking, the virus is still out there, practice safety protocols, but for the first time in over a year, I feel like we are getting ahead of this thing.

The stock market has been up and down, which Republicans want to tie to the success of the job the president is doing- same as gas prices. The truth of the matter is we have seen an increase in our GDP, positive movement in unemployment, a housing market that is showing extremely low rates with high competition favoring sellers and spending is going back up for the consumer after the stimulus checks deployed. Admittedly, gas prices did raise a little bit, but simple economics should tell us that the demand for gas is becoming more and more as people return to an office or travel again.

I am a gun owner who believes in provisions to acquiring and owning firearms. I believe it is our right to own firearms should we choose, but, there should be thorough steps governing and overseeing that certain people by way of mental illness (or other reasons as well) should be restricted to legally attaining a firearm. I mention that because I am in a paradox on border control as well.

It is my opinion that border control needs improvement. I do not throw that out there because I am some sort of traditionalist or purist like we see from the Trumpian way. My notion is simple: when I travel to another country, I legally have to document my entrance and exit. Consequence for doing otherwise is not one I want to experience. Our families (paint the waving American Flag imagery) came to this country, landed on Ellis Island and were documented to come in. I am even okay with being a sanctuary and safe haven for those from oppressed countries, but document it. Drive people who enter this country with the notion of working and living to move to citizenship. Let people drive for the American Dream (if they still want it after what we have seen the last four years under Cheeto Man). Let them be subject to the same laws and taxes we are. The impact to the economy and even at the state level will be beneficial. This is a true equality perspective. On the flip side, border patrol should be less order and more law in my mind. Protect to make sure of what’s coming across is not illegal, like drugs from the cartel or something, and less hassle and authoritarian perception to allowing people in.

Look, we have a long way to go. There was a lot of irreparable damage done in the last four years. Many of the Trumpists need to be deprogrammed. Are there things we are not being told as to the why from our government- yes. I believe that to be the case 100% of the time in our history. I am not saying to Biden opposers to not question things. I am not telling people to make Biden a saint in their eyes. What I am saying is do not vilify or damn the direction Biden is trying to take us simply because you do not see eye to eye with the politics of the individual at hand. It is time we started living in society, not behind the beliefs of conspiracies. It is time we picked up and moved forward to regain the strength we portray we have around the world.