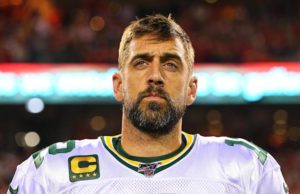 We have seen some drama in the NFL again, and once again relating around Aaron Rodgers of the Green Bay Packers. The hall of fame bound quarterback has aired his dirty laundry to the sports world, openly claiming he will not return to the Green Bay Packers this year if they keep their current General Manager.

The drama really started last year when the Packers selected a quarterback in the NFL draft with their first pick. Hindsight is always 20/20, and we will touch on why it matters here, but the first concern came when the pick was made with no courtesy call to inform the Green Bay franchise player, instantly creating a stir of gossiped speculation. For the hindsight piece, the Packers pretty much dominated the regular season and were the number one seed in the NFC going into the playoffs, which brings the main purpose of complaints to Packer fans: why waste that pick on a project quarterback when you could pick up weapons or support for your hall of fame bound quarterback. The Packers have made a consistent lack of a splash in the NFL draft during Rodgers tenure to find weapons to support him. Yet, despite the lack of talent acquired by the Packers, the quarterback has consistently turned chicken sh*t into chicken salad and made people around him better. The team’s record has not suffered despite these front office miscues.

Rodgers earlier this week referred to his GM as Jerry Krause. Jerry Krause was the most hated man in Chicago if you were a Bulls fan during the Michael Jordan era. Krause deservedly is recognized as one of the greatest general managers in sports history for how he composed the Bulls during their 6 title runs in the 90’s, however he is also regarded as one of the most hated front office personnel to the same people. Krause is really where the fingers got pointed at with all the drama that surrounded the dismissal of Phil Jackson and the eventual disbanding of the band in Michael Jordan, Scottie Pippen and Dennis Rodman. From a business perspective, it was both hard and simple to see Krause’s decision making during these times. The business end of professional basketball brings elements of salary cap space and costs associated with the assets that are the players. For an aging Pippen, Jordan and Rodman, he simply felt the Bulls had gotten all they could from them as players, and money would limit the ability to bring back all 3 after the Last Dance in 1998’s final title run. Another scenario where gossip and speculation hit the media waves and the turmoil within became very present.

Where I disagree with his business skills here is the variable of respect for the game. The Bulls were one of the most valuable sports organizations at the time, with Jordan still being a basketball God, and the pride and joy of the city. Jordan had it right to this regard that it should never have been considered to split the team up if they were not dethroned- the simple right to defend what was theirs on the court. We saw how this all played out. The 1998 Bulls season was riddled with betrayal, tension and hope all at the same time, and in the short term it was clear the Bulls won despite Jerry Krause and openly disrespected him every chance they got. But that one championship essentially set the Bulls back more than 10 years. Bulls fans sat through a bunch of hodge podge seasons with awful coaching, which were Krause based decisions. The franchise eventually transitioned leadership handing the reigns to former Bull John Paxson, which saw a couple of good seasons in this past 13 years, highlighted by Derrick Rose.

Aaron Rodgers is not Michael Jordan. The Green Bay Packers are not the Bulls dynasty. However, we are clearly seeing the same disrespect handed from both sides and from the fan and media perception, we are seeing a stronger shift to back Rodgers. Through the drama, it has been discussed that there are a few choice destinations Rodgers would be a landing spot for, all of which allow for Bears fans to be happy since they are all outside of the NFC North Division. Some conflicting reports have come to the attention of spectators in the idea that there is actually a long term contract extension going on between Rodgers and the Packers, which would really be a 180 of the turmoil we are seeing now. In preparation, the Packers have signed former (awful) Jaguar quarterback Blake Bortles as a contingency plan to Rodgers departure.

Whether he returns to the Packers or not, the hall of famer will clearly impact the future of this organization, Packers fan’s just need to hope it doesn’t bring a decade of miserable football to titletown.