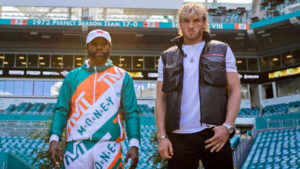 Undefeated, 12-time, five-division champion and Hall of Famer Floyd “Money” Mayweather, JR, 50-0, 27 KO’s and social media sensation Logan “The Maverick” Paul will square off in a SHOWTIME PPV event on Sunday, June 6th at 8:00PM ET / 5:00PM PT! The event is presented by: Mayweather Promotions, Fanmio, and Mavathltcs and will take place at Hard Rock Stadium in Miami, FL.

The continued circus act that Mayweather, JR. is putting on resonates with many of his fans, but is a disgrace to any real boxing fan and historian out there. Paul has no business in the ring and you will see the competitive boxing betting odds at powerplay Canada showing just that. They’re calling this an “Exhibition Bout”.

Paul has only fought once as a professional, losing a decision to fellow YouTuber KSI. Paul is 6-foot-2 and last fought at the 200-pound cruiserweight limit. Compared to Mayweather at 5-foot-8 and roughly 150 pounds, Paul is the much bigger man. He is also 18 years younger than Mayweather, JR. Paul does have a contracted limit on his weight, with a rule stating he cannot weigh more than 190 pounds.

In 2017, UFC Champion Conor McGregor faced Floyd Mayweather, JR, in a bout that generated hundreds of millions of dollars for both combatants. This fight will probably not be as big, but will for sure, put money in the already full pockets of the greedy Mayweather, JR. and the ridiculous Logan Paul.