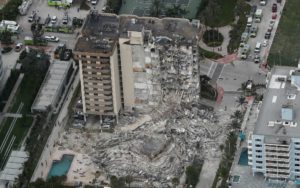 Like many—if not most—of you I have been following the horror of the collapse of the Champlain Towers condominium in Surfside.

First, where exactly is the Town of Surfside? Surfside is a (mostly) bedroom community just north of Miami Beach and is part of the 33154 zip code which is made up of that town, Bal Harbour Village, Indian Creek Village and the Town of Bay Harbor Islands. There is a common border at 96th Street between Bal Harbour and Surfside on the north and Surfside and Miami Beach at 87th Terrace on the south.

Indian Creek Village is an island in Biscayne Bay to the south of Bay Harbor Islands but is connected only to Surfside by a small bridge while Bay Harbor’s bridge over Indian Creek connects to the Town to Surfside and Bal Harbour Village at 96th Street, and the four municipalities are commemorated in a book titled “33154: The Story of Bal Harbour, Bay Harbor Islands, Indian Creek Village and Surfside,” published by The History Press of Charleston several years ago. The purpose of naming that book was and is not to sell volumes of that most interesting tome, but, rather, to give our R S R readers a geographic understanding of exactly what and where Surfside is. That town—Surfside—was separately memorialized in a book titled “Surfside,” which was published about four or five years ago by Arcadia Published as part of their “Images of America” series.

Over the years, the town (Surfside) morphed from being a bedroom community of very nice private homes with a two block long business district from 94th to 96th Streets on Harding Avenue, the southbound one-way counterpart to the northbound Collins Avenue, which, for many years, was the site of small apartment houses on the west side of the street with small motels on the east side, only three or four more than two stories. One of those, the Coronado, was a “restricted” hotel at which Jewish people were neither encouraged nor welcome to stay at as guests. The Champlain Towers was, and what remains is, on the site of that long-gone hotel.

The question now of “how did that horrific collapse occur?” is, it appears, coming more and more into focus, as it seems that the flaws in the various part so the building which led to the terrible disaster were apparent for a good few years. Because I am not an attorney, nor am I a construction engineer, I can not point fingers but I certainly can state that it appears that various entities, consultants, contractors, condominium association and management will all likely turn out to have some level of liability for various reasons.

There are, as this column is being written, at least 150 individuals unaccounted for, with, so far, only five or six bodies being uncovered. There is no such thing as “the saddest part,” because each life lost is sad beyond word, and it appears that not only did literally hundreds of people in Greater Miami have friends or relatives who will never return, but people throughout the country, as well as in the Caribbean and in Central and South America have the same situation facing them with the terrible loss of loved ones and beloved friends.

The hope of finding anybody alive is diminishing by the hour, if not by the minute, but the shameful part of this, at least to this writer, is the fact that certain individuals in the Miami area (who must and will remain nameless) have not only been putting forth vilely false rumors about having seen people who are still unaccounted for, but who have been attempting to put some kind of political spin on this horrific tragedy, which is as shameful as the event itself was.

I honestly don’t know if I will be able to report further on this event, but I certainly will—in the very near future–be putting forth commentary in upcoming issues regarding the past occupant of the White House and such as Marjorie Taylor Greene and the utter shamefulness of their hideously vile actions, if not their very existences. Please do stay tuned, and, above all, please be—and stay—safe.

@BadBradRSR A downpour would be perfect about now🤣😂