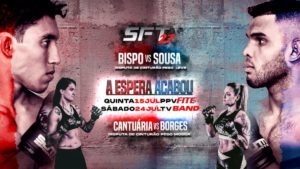 SFT’s 2020 Fighter of the Year, Manuel “Maumito” Sousa (6-0-0, SFT: 6-0-0), faces Brendo “The Monster” Bispo (17-4-0, SFT: 1-0-0) in the SFT 27 main event for the vacant SFT Lightweight Championship. A tremendous striker, 23-year-old Sousa is undefeated in combat sports with 23 straight victories in kickboxing, 18 by knockout, and each of his six pro MMA wins have all been in SFT competition, each ending prior to the conclusion of the second round.

Bispo, who is riding a 6-fight win streak, stepped up to fight hot prospect Sousa after a few other fighters passed on the opportunity. Considered one of the top lightweights in Brazil, Bispo trains at the famed Chute Boxeo, under the direction of the famed Charles Oliveira. The more experienced Bispo is a solid all-around fighter with seven victories by knockout to go with five by submission.

Cantuaria has fought in the traditional Japanese event, Pacrase, and she is rated among the top five in Brazilian National rankings, as well as by MMA Premium and Tapology. Borges has won her last two fights heading into her fight versus Cantuaria.

“We are all thrilled to be back in action after a 6-month layoff due to the pandemic,” SFT president David Hudson said. “Our first show back is stacked with great fights and fighters, as well as diversified with MMA, Xtreme and Jiu-Jitsu fights. Our main event between undefeated ‘Manumito’ against veteran Bispo has all the makings of an early candidate for SFT Fight of the Year. SFT fans love to watch female fights and we have a sensational match-up between Cantuaria and Borges for the vacant SFT flyweight crown. There are other great, entertaining fights on SFT 27 from top to bottom.”

All fights are subject to change.