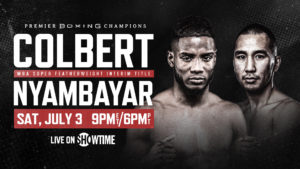 On paper, this fight has all the makings of a war. Colbert picked up the WBA Interim super featherweight title back on January 18, 2020 when he took a unanimous decision over Jezzrel Corrales. Since then, he has defended it once against Jamie Arboleda, stopping him in the 11th round.

Across the ring from Colbert, Nyambayar has challenged once for the WBC Super Featherweight strap against current champ, Gary Russell, JR. back on February 8, 2020, dropping a 12 round unanimous decision to the champion.

The 25 year old Colbert is almost four years younger than his opponent Nyambayar who is 29. Both have been in the professional ranks for six years with not a lot of bouts on their fight ledgers. However, both have very nice resumes of fighters they have faced. The quality of opponents in a limited amount of fights many times, gives a fighter the “must have” experience of being in there tough which can have them facing adversity and digging deep to win!

Nyambayar is a supremely talented fighter. But one who has shown certain holes in his last pair of fights which is the reason why Sports Betting Dime feels Colbert would be able to exploit that and hence is showing him as the odds on favorite at -650 over Tugstsogt Nyambayar.