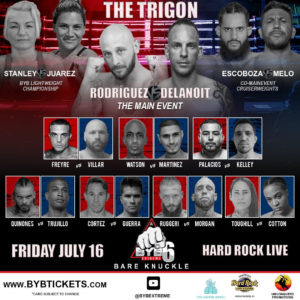 BYB Extreme Fighting series is back at Hard Rock Live at Seminole Hard Rock Hotel & Casino Hollywood with BYB 6 on Friday, July 16, at 7:30 p.m. Fight night will feature exhilarating bareknuckle brawls in BYB’s patented mighty Trigon ring, the only one of its kind, which was created by South Florida BYB and bareknuckle fighting legend DADA 5000.

The exciting bout card includes the undefeated and No. 1-ranked female bareknuckle fighter Christine “Knuckles” Stanley fighting in the women’s lightweight division. Former American Gladiator Erin Toughill, known as “Steel,” will face off against Jozette Cotton in a superweight battle. The men’s 185lb. tournament has reached the semifinal round with undefeated fighters JoMi “The Archangel” Escoboza facing off against Brazil’s Luis Melo, and Rene “White Boy” Rodriguez (14-0) battling Matt Delanoit (2-0) in the main event. The winners of the semifinal round will face off for the 185lb. belt at BYB 7 coming in September.