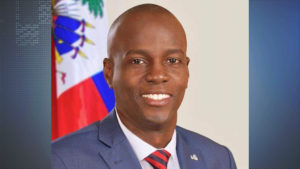 Recently it was reported that Haiti’s President, Jovenel Moïse, had been assassinated. His wife, Martine, was seriously wounded. She was flown to The States and is currently in a Florida Hospital being tended to and securely protected.

The couple’s three children are in a safe location. It doesn’t state if the children were home during the attack. Hopefully, they were nowhere near the carnage and did not witness this traumatic, life changing event in person.

Many Haitians had not been happy with their President, who’d been ruling by decree since October, 2019, after not allowing normal elections to go through due to “disputes”. I don’t know what that means and no one is elaborating, but many Haitians were calling for his resignation.

Elections are due to be held this Fall. It seems that of the many opposing his leadership, there were those who believed he might declare himself as an autocracy and not allow the elections to take place. This may be the most obvious motive, but is it true or is it the perfect manner with which to obscure the actual reason(s)? These are speculations; however, it is evident that he was wanted removed from any possibility of that or anything else from taking place.

Haitian Authorities killed four gunmen, detained six others, one being an American citizen of Haitian descent, and called it a day.

From what I’ve read, after the killings took place, the assassins made their getaway in a car which was quickly blocked by police, who, as stated above, killed four and detained six.
What is puzzling to me is that the police seemed to be “Johnny on the Pony” and pretty “Jack Quick” in blocking the exit of these, as we say here, “alleged gunmen” as they fled the scene.
How’d the Authorities know who to block or what was even going on? It seems like a set up to me and yes, my spidey sense tells me those laying in waiting were in on it, but that is my personal opinion.

It is said that heavily armed men stormed the president’s home, kicking down the door while announcing themselves as Drug Enforcement Agents. Again, I reiterate: Haitians earn about two dollars per day. Who of those can afford those types of weapons when they can barely feed their families?

Local residents went “gangsta”, burning cars and creating chaos when the news erupted, going as far as seizing and beating two “foreigners”, who were then brought into police custody. They were looking for anyone to blame and taking matters into their own hands. It is unknown if these beaten foreigners were even involved. Who are those “foreigners” who were beaten? What was there supposed purpose for being there? No one is giving out their identities.

Léon Charles, Haiti’s Chief LEO, confirmed that his team had caught, killed and detained the alleged assassins. The Haitian LEO’s are suggesting that “foreign mercenaries” are involved.
Far from “Team Spirit”, this news reeks of manure. The first reports claimed the attackers spoke English and Spanish. Yeah, so?

That; if truthful, proves nothing. They are fast to point out that the official languages of Haiti are French and Creole, which; to quote the website: “bilingua” states that: “Haitian Creole has 10-12 million speakers worldwide. This fascinating language is based on 18th-century French combined with Portuguese, Spanish, English, Taino, and countless West African languages.” As a French speaking polyglot familiar with all of the Spanish and French dialects, I can tell you that one can know EXACTLY where someone comes from the moment they open their mouths, so saying that the alleged perpetrators spoke English and Spanish is not saying much. ‘From where?’ is my question.

The Dominican Republic, whose population also has their own Spanish-French, Portuguese, Taino, African dialect, which sounds nothing at all like the Spanish spoken in Europe, Mexico, North or South America, is located in the exact same island separated by a simple chalk line in the road. You can literally stand in those two totally different countries at the exact same time. My point: They need to be more precise. The fact that they’re going “general” has me believe there is much unsaid.

So, what’s going to happen now? Who’s in charge of the country?

The Haitian Constitution has written in it that the President of the Supreme Court assumes control should there be a vacancy in the presidency; however, that gentleman’s life was recently claimed by Covid-19 or so, it is said.

Next in line is Mr. Joseph, who immediately jumped into the role, sans le bain de jour, giving press conferences and declaring a state of emergency set to last for two-weeks.
Here’s the kicker. Mr. Ariel Henry, a 72-year old neurosurgeon, was named as the NEW Prime Minister Designate just DAYS AGO. He has yet to be sworn-in, but he is insisting that it is he, who should be in charge.

Meanwhile, back at the ranch, The United Nations is clapping for Claude, and it makes me wonder. The timing is too perfect.

Another person, this one, the United Nation’s special envoy, Ms. Helen La Lime, believes she should remain in charge until the elections this fall. Why? What hole did she climb out of suddenly? Why does she believe she has any say over this case?

Our nation has said that the elections SHOULD go ahead this year. No! Ya think, Captain Obvious?
As far as I’m concerned, those quickly pointing left, right and center, or blaming “foreign mercenaries” need to sit down AND be brought in for questioning; but by whom, given their cops are just like ours – some good, some bad, some just plain fugly.

With all the gang related activity that has been keeping Haiti from blossoming since the dearly departed took office, it seems something had to be done, but murder should never be part of the equation.

I don’t think we’ll ever find out the actual truth here. U.S. and Haiti, are different sides of the same coin.