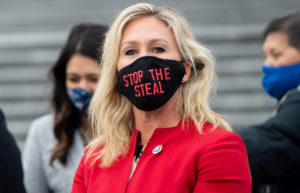 Can I start by saying a massive thank you to all those people out there who have an exemption from wearing a face mask but found innovative ways to find a face covering? To them, I am grateful.

I am not quite sure as to why people would be granted exemptions – I am no scientist – but they have, I am sure, gone through some form of accredited medical pathway to be given the exemption. Some will, of course, manage to make claims because they believe that face masks are a form of oppression from the lizard people in charge but hey ho, I am past the point of caring too much about them.

I am not past the point of caring about people like Marjorie Taylor Greene.

Ain’t she a treasure?

It’s taken me a while to contemplate her whole mask wearing is like the holocaust nonsense but there are reasons why I find it tough.

I have been to Yad Vashem. Don’t know what it is? Google it.

I find lazy comparisons to historical events offensive. I ain’t Jewish but I find the whole comparison to an era of humanity best remembered for the appeal to never happen again, like you are comparing two flavors of ice cream, horrific.

OK, so she apologized. She went to the holocaust memorial and “owned her mistake”. Her father would have approved apparently. That her apology was prominently displayed in the media in the UK goes some way to show us how offensive such a comparison actually is.

The fact remains that wearing a mask is a very simple part of trying to stop the spread of a killer, it really and truly is that simple. The arrogance of people who believe it is a violation of their human rights is part of an absurdity that left unchallenged spreads like a seed trying to find itself a place in which to grow. It is the Japanese Knotweed of this pandemic.
How dare people tell people what to do, they cry!

Like telling you, you should obey the laws of the road. Like telling people that fundamental rights be laid down in a written constitution, so you know what to obey? Fundamentally, we have all being following rules since birth. The rules change people. Why? Because the world changes, that’s why…

In the UK we do have the same type of stupid people who have rejoiced over some of our restrictions being lifted. COVID is surging.

The link between being ill and being taken to hospital and dying has fallen in recent months. The idea of herd immunity is perhaps gaining ground. This is the idea that if enough people have had the illness it shall stop spreading and the herd shall fight it off as they have the collective antibodies to so do and the virus cannot find hoists to thrive amongst.

Coupled with the vaccine roll out, this idea has gained a lot of ground. It follows therefore that we have to “live with” this illness. We all are getting used to that idea and a bit like influenza that kills about 50,000 people annually in the UK, we are now realizing that COVID is just another disease we are trying to control by vaccination.

There are many, of course who do not think that vaccine is a good thing. It is designed to control us, alter our DNA, track us, make us susceptible to the continued Satanist cult running our country – I have tined down their views for vulnerable readers…

These people, however, continue to exist.

They continue to spread their ideology. And it is an ideology. Once you buy into one of their theories, the rest follow in quick measure. People, especially the vulnerable, become caught up in the whole damn business and the conspiracy finds many followers who are following on with the ideological Kool Aid until eventually they are asked for an ultimate sacrifice. Nowadays that is less likely to be suicide physically but can be financial suicide as you contribute more and more of what should be on your family’s table into the coffers of a rich guru or cult like organization.

But it begins with a simple idea. It begins with what annoys you. It starts with that real nonsense thing you are forced to wear. People give you “scientific” reasons why you should not wear it because a person sidelined by a big organization was once aware of why it is a wrong thing. They have a PhD or a degree or something impressive and they tell you the arguments and if people don’t believe them you only have to be disruptive, cruel and argumentative – that is repeat the same thing all the time and call people stupid – to win. Apparently, that works really well in a world they live in.

If you see these people just shake your head, smile and walk away from them. They have been made bold by the likes of that elected Georgian woman with more words than sense. Save your words for those worthy of discussion.

And wear the mask, why don’t ya! Humanity is grateful for your own humility and humanity.