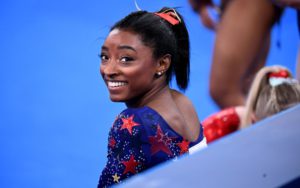 Heroes get remembered, but legends never die. Athletics is a great desire of mine, be it participate, watch, study…whatever. The Olympics on the other hand draws very little interest from me. Growing up, I enjoyed watching USA Men’s and even a little bit of Women’s basketball starting with the 1992 Dream Team. I may occasionally glance when the wife has it on at key highlighted events… things like Michael Phelps swimming, Michael Johnson running, or even some winter sports like USA hockey. All that stated, I do support the USA in the Olympics, and even with rooting us on, I also will hope certain athletes from around the world perform well- that is more tied to athletes who are more well known here for their professional sports contributions here in North America.

The gymnastics portion of the Olympics is not my favorite or most interesting attraction of events to view. That falls more under the glance if I make the mistake of letting go of the remote. No argument, gymnastics is arguably one of the most prideful competitions for America every four years, and since 1996, I have seen America perform exceptionally well. Keri Strug and Dominique Moceanu are some of my earliest memories of triumphant athletes in gymnastics, and rightfully so.

We live in a sickly unique time in our country. A time where pushes to eliminate injustices are popping up on a daily basis. A notion to eliminate prejudices and live the life of liberty and happiness were allowed. Race, gender, sexuality and religious freedoms are constantly in the spotlight. More than ever, personal liberties are breaking silences that have gone on for lifetimes. Pride and ego were a huge part of keeping that silence, along with fear of discrimination. This past week, we saw a huge story that broke in the Olympics around Gold Medal Gymnast, arguably the best in the world, arguably a legend, also become a hero to many.

This past week, Simone Biles withdrew from competition at the Olympics. Rumors swirled, and eventually popped up that it was a mental ailment that prevented her from continuing to compete. Biles is clearly a beloved athlete, but outlets put the headline indicating her withdraw due to mental health was aligned with the pressure getting to her. The traditionalists and Trumpian patriots poured the metaphorical manure all over Biles. Claims she quit on her team and her country because she couldn’t handle the pressure allowed for a continuous disrespect to Biles, but also in the big picture, minimizing the effects of mental health needs.

The truth is simple. Biles DID NOT QUIT ON HER TEAM, HER COUNTRY, OR THE OLYMPICS….THE OLYMPICS AND THE COUNTRY QUIT ON HER! The Olympic judges basically put a handicap on her with her well-known talent that is far and beyond the rest of the world. Scores that would normally be higher than the competition were being hampered just to get some parity within the competition. Imagine if every time Michael Jordan hit a jump shot, instead of the two points the basket is worth, he was only awarded one point. The level of fairness is completely out of whack, and that is in basketball, a sport that really only requires one to run, jump, squat (back when defense was played) and shoot. This is what is being done to Biles. The handicapping of her execution is beyond the realm of unfair, but critics push that she should be like Gary Cooper, the strong silent type (Sopranos); to just go out there and win despite them. She is on the highest stage in the world in a competition that if not executed correctly, she could wind up severely injured. Imagine having to perform on that level knowing your best is so good, it becomes not good enough because judges want to make things fair for those so far behind you. Have that running through your head while running full speed with crowd ambiance attempting to do flips with twists in the air with the need to land flawlessly as if you never left your feet.

Haters show up on the keyboards strictly to overcompensate for their lack of accomplishment in life. They slam the results of her actions in withdrawing and assume a relatedness to cowardness to live up to the pressure. These people, who most likely can’t even do a somersault are critiquing someone’s needs because of an age-old stereotype of mental health being a weakness. It is 2021. Mental Health is every bit of important as physical health. Not to mention, these classless and clueless keyboard warriors who assume they have the right to provide that commentary, have no idea what Simone Biles has been through or what she is currently going through.

I stand behind Biles. I believe she did the right thing for her, and frankly unselfishly for her team. USA still won the Gold. And as depressing as it was to see the attacks on Biles, it was ten-fold better to see the outpour of love to support Biles. Everything she has gone through as a human from sexual abuse, at a young age at that, to dominating her craft, Biles continues to be a legend, and her heroism for what is right will always be remembered.