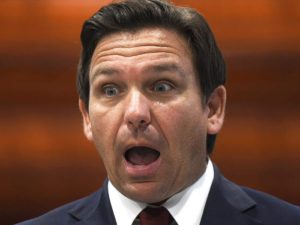 To my friends and readers of Ringside Report:

First, sincere apologies for not turning in my submissions to our grand leader “Bad” Brad in a much more timely manner, but, regretfully and unhappily, “time and the tides wait for no one,” and we have been, as the great expression goes, “up to our ears in alligators” with all that we are involved in, from giving talks, to keeping up with correspondence, to handling local disputes to consulting and on from there. That being said (written), I am pleased to now return to you, and, hopefully, send my columns to Mr. Berkwitt in a more timely manner. For now, though, all I can do is promise you all that I will make every effort and attempt to do so.

So what do we begin with?

Simply put, as incredibly ignorant and as nauseating and disgusting as several other American governors are, it appears that, unhappily and unfortunately, and as it happens far too often, when it comes to shotheads (and don’t forget to dot the “I”), monkees, muppets, mutts, marooks and morons, the Scumshine State is, once again, leading the pack in penis-brained numbskulls as governor.

Here we are in the worst viral crisis since the great flu epidemic of 1918, and with laws outlawing smoking in so many places, doing drugs in public, and, in both cases, not asking the parents to decide, yet the nitwit in Tallahassee is refusing to put a mask order in place, and that with the Penis-insular state leading the nation in cases.

The remainder of today’s column was (I am honored to state) sent to me by my religious, philosophical and ethics advisor, the great and inimitable Lord Ernie, he the head poohbah of the Church of Heathenism and Hedonism, which, I must tell you, he does a more than admirable job of running, when he is not acting as the head person of the Church of the Box Spring, in both cases, revered and salutatory positions.

Please read the remainder carefully, as I think, feel and believe it will not only bring enlightenment to you, the reader, but will, hopefully, also propel you to begin spreading the gospel of the great

“And people thought a clown like Trump couldn’t be replaced. Enter stage right, far right, the Trump clone, the Honorable Ronald McDonald DeSatanis or the little Fuhrer. We all know that Florida is so over crowded that it is tipping into the waters surrounding it. So your great and intelligent governor came up with a perfect solution. It is a two part plan, consisting of stopping people from migrating to Florida and killing off as many of those who already live in Florida as are stupid enough to follow his Nazi-like edicts.

“By assuming the Trump mantle of complete stupidity, DeSatanis is telling people in other states to stay put unless you want to come to an asylum ruled by a complete lunatic. Florida is at the tipping point. And you thought it was just Global Warming that is causing the waters to flood Florida. Think again.

“There are now over 21,000,000 people living in a small area is causing the state to sink back in the waters from which it came. To thin the numbers of those living there Governor Ron is now defying logic and doing everything in his power to kill as many school children, teachers and administrators as possible by banning a mask mandate in public schools. That concept is beyond imagination. Even Trump in all his inanity and moronic stupidity didn’t come up with a death plan like that which, to DeSatanis’s shame, includes withholding pay from school administrators who want to keep children alive, pure diabolical genius. Ron is an early candidate for both the Donald Trump Stable Genius award as well as a Darwin Award.

“Ron is not going un-noticed as everyone is talking about him. All the late night comedians are giving Ron extra space in their monologues that was once reserved for POTUS the Putz. Newspapers are giving him print space and portraying Florida as the dumbest state in the union. Mississippi had that title for so long but Florida has pushed it aside. Sorry, Mississippi, but DeSatanis has brought Florida to new heights or should I say new depths. There can be only one and Florida is now is Afghanistani territory.

“I never thought I would say that I am glad that I live in New Mexico by at present I am. To you Floridians there is plenty of space out here in New Mexico. If you come here please bring enough money to start a deli in Albuquerque. Absolutely no Jewish Deli’s here. I would kill for a corned beef on rye sandwich. Where is Wolfie Cohen when you need him??”

Your reporter on, of and about the most ridiculous and asinine people on the planet