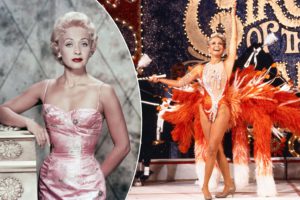 Jane Powell, one of the last surviving stars from the Golden Age of Hollywood, passed away September 16, 2021, from natural causes at her home in Wilton, Connecticut. She was 92. The actress, known for her “girl-next-door” image, starred in the classic films ROYAL WEDDING (1951) and SEVEN BRIDES FOR SEVEN BROTHERS (1954).

Ringside Report sends our condolences to Jane Powell’s family during their time if grief.