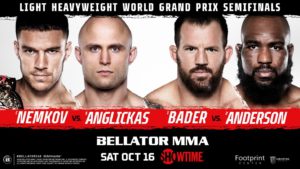 Married Arizonans Benson and Maria Henderson to be featured in separate bouts of 14-fight BELLATOR™ card at the Footprint Center in Phoenix, Ariz.

Fighting for the first time on the same card, married Phoenix residents Benson Henderson (28-10) and his wife, Maria Henderson (1-0) will be featured on the main card and preliminary portion, respectively. Maria will open the evening when she squares off against Collette Santiago in a strawweight battle of hard-hitting Arizonans. After cheering his bride on, No. 3-ranked lightweight Benson will return later in the night against former 155-pound titleholder Brent Primus (10-2). Born in Colorado Springs, Colo., Benson famously proposed to Maria in the cage following his 2013 victory over Gilbert Melendez in San Jose, Calif.

Anglickas, of St. Charles, Mo., replaced Anthony “Rumble” Johnson on short notice to challenge Nemkov. Hoping to ascend to the final of the Light Heavyweight Grand Prix with a victory and an opportunity to fight for the $1 million prize, the pride of Plunge, Lithuania, and official Light Heavyweight Grand Prix tournament alternate has defeated nine consecutive opponents after splitting his first two professional bouts.

Bader, of Chandler, Ariz., became the first BELLATOR fighter to hold belts in both the light heavyweight and heavyweight divisions at BELLATOR 214. He accomplished the rare feat by knocking out the legendary Fedor Emelianenko on punches at 35 seconds of the opening round to capture the BELLATOR Heavyweight World Grand Prix in January 2019. A two-time NCAA All-American wrestler during his collegiate career at Arizona State University, the Reno, Nev., native counts triumphs over Davis (twice), “Rampage” Jackson, Rashad Evans, and Keith Jardine, during his illustrious 14-plus-year MMA career.

Anderson, of Robbinsville, N.J., has vanquished six of his past seven opponents, including a third-round stoppage of Dovletdzhan Yagshimuradov at BELLATOR 257 six months ago in April 2021. In his first promotional appearance, the Rockford. Ill., native recorded a second-round TKO in November 2020 over Melvin Manhoef at BELLATOR 251.

The BELLATOR Light Heavyweight World Grand Prix commenced at BELLATOR 256 on April 9, 2021, when Bader defeated Lyoto Machida via unanimous decision, and Anderson dismantled Yagshimuradov in the tournament’s quarterfinal round at the Mohegan Sun in Uncasville, Conn. The following week featured current champion Nemkov defending his crown against former champion Phil Davis. The victors of Nemkov-Anglickas and Bader-Anderson will meet in a highly anticipated tournament final later this year.

Spotlighting the 10-fight preliminary card will be a light-heavyweight bout between No. 10-ranked Swedish sensation Karl Albrektsson (12-3) and BELLATOR newcomer Dovletdzhan Yagshimuradov (18-6-1), as well as undefeated female brawlers Sumiko “Lady Samurai” Inaba (2-0) of Maui, Hawaii, and Canadian “Ruthless” Randi Field (2-0) in a featherweight showdown. Rounding out the preliminaries will be British Columbia’s own Lance Gibson Jr. (4-0) hoping to keep his unblemished professional record intact in a lightweight brawl against Raymond Pina (9-4) of Tucson, Ariz., and the always-dangerous Jaylon Bates (3-0) returning to the BELLATOR cage for the third time in 2021 when he battles Brazilian Raphael Montini (6-4, 1 NC) in a bantamweight brawl.