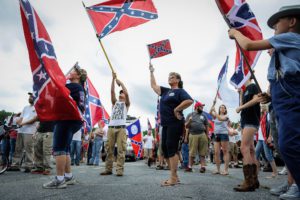 Although, yes, the percentage of Americans being vaccinated against the horrors of the Covid virus does seem to be increasing, the incredible and utterly shockingly shameful stupidity of the American far right continues to be as sickening as it is dangerous. “But to whom is it dangerous other than the morons who won’t get vaccinated and/or refuse to “mask up,”” you ask, and the answer, dear readers is “to you and every other human being that those self-centered, moronic, shamefully stupid numbskulls come in contact with.”

The utter and total nonsense which those dumb-ass twitter-brained G-d fools attempt to foist on anybody who will listen to or believe their utter hooey is that “government has no right to interfere in my personal life,” or, “the government has no right to dictate what I have to do about my own safety,” and the answer to those beyond-asinine statements is either, “how and when did you become that stupid?” or “do you know how totally stuffed with feculent feces you are?” or, “why don’t you give a damn about not only yourself but everybody around you?”

Those damn fools will always try to tell you that, “well, that’s different,” but, folks, “it ain’t no different,” and the same rule applies as when (I believe it was) U. S. Supreme Court Justice Brandeis stated that, “no, you do not have the right to yell “fire” in a crowded theater,” which, of course, proved that, indeed, the first amendment to the U. S. Constitution does NOT give you the right to harm innocent people.

The total and utterly thoughtless behavior of the sub-human, brainless fools who make statements attempting to justify their behavior should be not only result in their being muzzled, but, also, jailed, and scum such as the governors of South Dakota, Tex—ass and Florry-duhhhh and several other states, should be put in jail for their LYING, nonsensical slop, trying to defend the indefensible.

There is no excuse, valid or otherwise for the (mostly) FAR right wing, sleazy, slimy, degenerate, thoughtless, uncaring pieces of human detritus who show not a whit of care or feeling for themselves or anybody around them. Frankly, and truthfully, after they are given a major and massive brain-washing, that garbage should be put in jail, particularly in a jail in which the bubbas are going to take particular delight in “having their way with that scum, ‘cause that’s my right!” especially after said scum tells his or her fellow inmates that they don’t have the right to do that.

Well, guess what, penis-brains? If you think that you have the right to endanger every person you come in contact with, those people, who have had their rights taken away are going to assure you that they do have the right to have their ways with you, and, frankly, I hope it hurts.

Stay safe, all, and don’t be “them” If you haven’t already, get your Covid shots and please “mask up.”