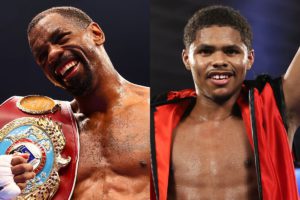 On Saturday October 23, 2021 at the State Farm Arena in Atlanta Georgia, current WBO junior lightweight champion Jamal Herring, 23-2, 11 KO’s defends his title for the 4th time against undefeated Shakur Stevenson, 16-0, 8 KO’s. Both of these fighters are among the best in the world. Current odds provided by Sport Betting Dime, has Shakur at -650 favorite over Jamel Herring.

The champion Herring has faced better opposition and his recent dismantling of Carl Frampton was a very solid win. Both fighter’s knockout ratio is almost identical so we may just get a very tactual fight between two world class fighters.

Herring comes from New York with Stevenson stemming from New Jersey.  With their East Coast roots and both states producing some great fighters, that may also factor into making an exciting fight.

With boxing back on  TV, the fans are craving as many fights as they can see.