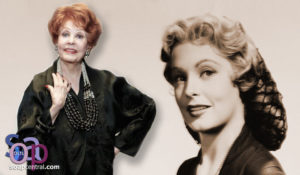 Screen legend Arlene Dahl, one of the last surviving stars from Classic Hollywood cinema, and mother to actor Lorenzo Lamas, passed away November 29, 2021 in New York City. The cause of death was not disclosed. She was 96. Lamas took to social media to announce his mother’s death with a heartfelt tribute.

Dahl was also a businesswoman. She founded Arlene Dahl Enterprises in the mid-1950s, selling lingerie and cosmetics. In addition, she worked in advertising for Sears, Roebuck Co., and founded a perfume company.

Ringside Report sends our condolences to Arlene Dahl’s family during their time of grief.

@BadBradRSR From my Military family to you- Thank you for your service. 💙💛🇺🇸
You know there is a website that will let you recreate your bars into a sticker for your auto or wherever you want to put it?