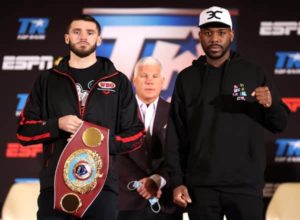 This Saturday at the Turning Stone Resort & Casino in Verona New York current WBO Light Heavyweight Champion Joe Smith, JR., 27-3, 21 KO’s defends his belt on ESPN for the first time against unranked Steve Geffrard, 18-2, 12 KO’s who is a last minute replacement for number 11 ranked Callum Johnson, who tested positive for Covid-19, knocking him out of the fight.

Geffrard was in training for a fight that was supposed to take place in Delray Beach, Florida when he got the word about his shot at the title, so he should be in decent fighting shape.

Geffrard was stopped in his pro debut and in his next fight, lost by a split decision, both in 2013. Since then, he has reeled off 16 straight wins, but against C+ level opposition.

On the other hand, Joe Smith, JR. has faced the far better opposition in his pro career over the last 12 years. On paper, this really no match and a keep busy fight for Smith, JR, who to no fault of his own, had a top 15 opponent who would have been on his dance card.