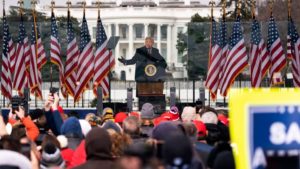 That being said, I do not understand how none of these people that were charged with felonies from their attack on the Capitol, with at least four counts of felony murder. Ashli Babbitt’s family wants someone to be charged with murder for her death. While it was her fault for storming the Capitol to try and get Congress members; she was sent there by Trump and others like Lin Woods. I don’t see them ever being charged but you best believe under the law they should be. They conspired to take over the Capitol to keep Trump in power. That was their purpose. How do I know? They said it out loud as many times and ways as they could.

When it comes to law, I am a novice but the things I know, I know. I know felony murder is a thing. I know Trump, Lin Wood, Ted Cruz, Rudy Giuliani, Don Jr. and on down committed felony murder when they incited people to storm the Capitol.

I don’t know how to get a ground swell on a topic, but this ground needs to swell. People died. It should not be ignored. I am so tired of people treating this like it is politics. Yes, it happened in a political arena but it is a crime and should be treated accordingly.

When we were attacked on 9/11, they did not just go after Osama Bin Laden. They went after people who knew someone that knew someone who was a terrorist. Family members were arrested. That is where we learned the term terrorist cells. Yet somehow these days it’s different because these people work in government? No, nope, not at all. Not having it. These people committed crimes. Even down to the people that helped to plan it. NO PASSES. We were attacked and I wish someone would start acting like it. Felony murder are the words we need to see coming forth. Will we?

@RoArquette I love Rosanna Arquette's interviews/podcasts. She's like you touch on a lot of angles make it flavourful