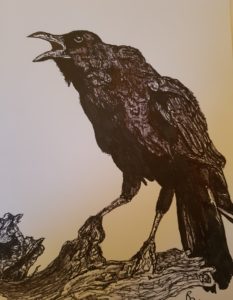 I love video games. I’m not an avid gamer, but there are times and games that I just get lost in, Ico was one of them. First of all, it’s about the graphics. For a Playstation 2 game it was utterly beautiful, totally enthralling. It was the first time that I ever saw water in a game that ACTUALLY looked like water, and the scenery! The setting! A cold and intimidating castle reminiscent of Mervyn Peake’s Gormenghast.

Second, it’s about the story. A horned boy sacrificed in a glowing urn to an evil sorceress has to work his way through the castle, all the time fighting shadow demons while trying to save a doomed fairy princess. It is endearing, disarming, ethically challenging. Ico – the boy – has to protect and assist Yorda (the fairy princess) to escape her terrible fate. He leads her by the hand, and if he leaves her for too long, she is captured by the demons. It’s stressful and delightful in equal measure.

Finally, it was about the gameplay. There is fighting, and more than I remember, but that isn’t the focus of the game. In fact, it’s the environment. In order to move through the castle, you have to negotiate some very challenging puzzles. To get up to a hanging chain you will need to find a box to stand on, which may very well be hidden three steps ahead. Completing it was one of the most satisfying gaming experiences I’ve ever had.

That first completion was over 20 years ago, but I have played it several times since. Partly, because it’s such a wonderful game, but also because it has a lot of memories for me. Like the Wizard of Oz and The Famous Five, it’s one of my safe spaces. Playing it takes me back to easier times.

You see, I played it with a friend that passed away a few years ago. She was an avid gamer, a determined geek, who loved anything fantastical. Star Wars, Harry Potter, Lord of the rings, she loved them all. She was a person who faced great challenges in her own life, but she still managed to turn a cheerful face to the world.

She would narrate her progress through Ico – Jumpy jumpy, climby climby, and we would be so lost in trying to solve the puzzles that we often didn’t notice. Then we would realise what she was saying and burst out laughing. It was a good time. I miss her even though we hadn’t really spoken very much for a while before she died.

This play through was very emotional. To find the game, to find that the PS2 still worked, and then to complete it all and open all the Easter Eggs was wonderful. Just to play it again. But also, to feel my friend there watching, laughing and saying JUMPY JUMPY. She was there, I’m certain of it.