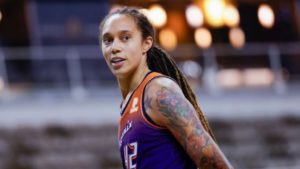 Russian customs officials released a statement on Saturday that American WNBA player Brittney Griner was detained at the airport after a vape and cartridges with hashish oil had been allegedly seized from her luggage. The seven-time Phoenix Mercury center was later identified by a Russian news outlet Tass. Authorities in Russia are currently detaining Griner on drug charges.

Russian authorities said a criminal case was opened over large-scale transportation of drugs. If convicted, it can carry a sentence of up to 10 years in a Russian prison. The drug customs officials claim Griner was transporting is hashish oil, or hash oil. Hash is a type of concentrate from marijuana that has high levels of THC in it. Methods of consumption vary; although the most common way is through a cartridge using a vape pen.

Griner’s agent Lindsay Kagawa Colas, released a statement regarding her client’s detention, saying “We are aware of the situation with Brittney Griner, 31, in Russia and are in close contact with her, her legal representation in Russia, her family, her teams and the W.N.B.A. and N.B.A.” The W.N.B.A. also released a statement that Griner “has the W.N.B.A.’s full support and our main priority is her swift and safe return to the United States.” The basketball star signed a contract to play for the Phoenix Mercury during the 2022 season in Moscow for $228,000. It’s common for WNBA players to go abroad as the pay is much higher during the off season in the states.

The athlete’s detainment is happening during the most tense moment in U.S.-Russia relations since the Cuban missile crisis in 1962. Significantly, this immediately follows after the Biden administration led the imposition of brutal sanctions and has maintained support from dozens of other nations on Russia’s elites, leaders, and government. President Putin called the sanctions “akin to a declaration of war” against Russia.

Additionally, the U.S. The State Department issued an updated advisory to the one it released a few weeks ago that previously warned Americans of traveling to Russia due to the confrontation with Ukraine. The department added that “potential for harassment against U.S. citizens by Russian government security officials,” and also cited the limited ability of the U.S. Embassy in Moscow to provide American citizens any assistance in the country. Former U.S. ambassador to Moscow Michael A. McFaul has commented on the situation to the Washington Post. “I obviously don’t know the circumstances of her detention, but Griner’s arrest should serve as a wake-up call to all Americans in Russia,” said McFaul. “Get out. Shut down your businesses now.”

Russia’s Customs Service released a video of the supposed incident where a traveler is seen going through security screening while an agent appears to begin examining a package from the traveler’s bag. Later you can see the traveler walking with officials through the airport. According to Russia’s Customs Service, the incident had occurred in February which raises concerns that Griner has been in custody for some time already. It’s unsure when U.S. officials were notified of her detainment as well.

In more recent years, the U.S. has constantly cited Russia for concocting charges and sentencing U.S. citizens, like former Marine Paul Whelan who was sentenced to 16 years for espionage during a closed trial. The Washington Post even suggests that the “detainment of a high-profile American could even be an effort by Russia to gain leverage in the political and economic standoff with Washington over the Ukraine invasion.” The U.S. Consulate does provide legal services for citizens detained abroad.

The Phoenix Mercury spokesperson declined to comment on the status of the situation, but that they were “monitoring it closely” and “at this time our main concern is her safety, physical and mental health, and her safe return home.” The WNBA was also watching and said its most pressing matter is “her swift and safe return to the United States.”