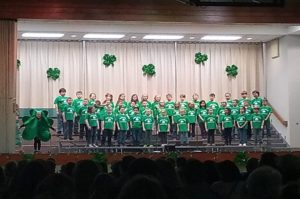 I grew up in a time when it was expected that you did not say much as a child and listened to your betters and elders with a degree of respect that opened the door to abuse.

We did not know it at the time, but the level of respect demanded of us retained that silence in ways that have affected us for the rest of our days.

In Scotland you can leave school at 16 years of age but most stay on until they are 18. From birth up until you are 18, that means that 13% of your life is spent in an educational institution. It is an institution as it defines much of the rest of your life thereafter, your behavior mimics institutionalization.

Whilst important and for many, “the best years of their lives”, school is not a universal pattern that finds every child safe, secure, warm or listened to once they have endured or received 13 years of education.

But school sticks with us.

It sees us through our initial wonder at the world, our most vulnerable learning opportunities and the development of who we shall become as adults. Whilst there we learn to read, write, count, engage, dismiss, debate, respect and learn. Some of what we learn has already been taught by our parents and in communities where the rule of respect rather than the law can hold sway.
If we are lucky, and increasingly if we are very lucky, we emerge from school with a fully rounded set of qualifications which have allowed us to be the best we can be and provide a platform to bring others along on the journey with us.

Increasingly if we are lucky.

But if we are not lucky, our experience of school is of hidden messages, locker room challenges and fear at almost every step. It can be a time when our futures are defined, not by what we learn but by what we experience. It can take an army of educationalists to tell us what ought to happen and five seconds in a room with our peers to show us what will happen.

If we are not lucky then who we are and who we are becoming is outside the scope of the respect given to others. Our images are blanked out, smudged to ensure we “know our place” and keep the peace by being silent on our feelings or on ourselves. We look at the textbooks and find nobody like us, we hear the debates from voices that sound nothing like what we hear in our homes, and we have nothing to benchmark our futures against because nobody like us amounts to much more than a hill o’ beans. And so, we become fodder for those who wish us ill.

As we graduate into an unfulfilling life all we ever hear is that it was all our fault, we had the opportunities as much as everyone else and look at them. We had the same teachers, the same lessons, the same learning and others did not turn out as badly as we did.

So, where does it start and how do we finish it?

But I do know where it won’t be solved.

As we watch Ukrainians fight against an oppressor who wants to rewrite their future based upon lies of the past, and we extol freedom as our creed, I have noticed that in Florida, they wish to restrict the opportunity for young people to be who they are. A bill to stop teachers from speaking about being gay is on its way for those between the ages of 5 and 9. It would stop children from being able to talk about the sexuality of their homes, where they are loved by two fathers or two mothers, or who have an aunt or uncle or even next-door neighbor with the pride of loving and living.

Proponents claim it empowers parents about their children’s education. Oh dear. They want to protect the parents who are unable to talk to their children between the age of 5 and 9 about difficult subjects. These children should already be in the White House with that level of debate and challenge in their armory if they scare their “betters and elders” already…

In Scotland we had a similar law called Section 28. We consigned it to the bin of history. It was a bad piece of law making at best. At worst it damaged countless children and young people.
So, if you want to continue the abuse and add to the damage young people already suffer from, support the bill. If you truly believe in freedom, then you know what to do – paint it blue and yellow and protest for universal freedoms, not just the convenient ones …

Uncle Geordie – A euphemism for the Devil in Wigtownshire, in the south west corner of Scotland.