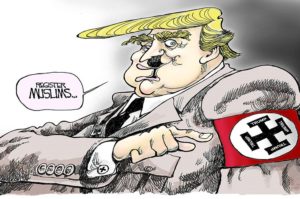 Sadly and unhappily, it has reached the point in America where it is now necessary to question not just the motives but the sanity of anybody who supports one of the largest pieces of manure who has ever lived, Donny Trump.

A lowlife, a liar, a degenerate of the first and worst order, with five phony deferments and six phony bankruptcies , the man (I truly hesitate to refer to him as that) is a contractor and employee screwing, thieving, corrupt, anti-American, commie and nazi-loving SOB of the first and worst order. However, the description must be extended to anybody of any race, creed, sex, age, handicap or national origin who supports such a massive slime bucket.

To see what has recently occurred with the disgusting excuse for a female who is the wife of a Supreme Court Justice (if ever a human being was totally unqualified for that exalted position it is certainly Clarence Thomas) with her attempting to convince certain powers to overthrow the election should be enough to put that pregnant female dog in prison.
But what about the rest of the garbage, the sleazy, slimy Republican scum in Congress who voted against condemning Herr Putin for what he has done in and to Ukraine, which is exactly what Hitler did to Poland. Less than humans such as Marjory Taylor Greene and the penis-brain from Florida should be charged with capital crimes, along with the other ten. And then, of course, there is the lowest of the low, the hughest garbage pile of all time, Spawn Hannity, a worthy (or not) successor to Lardass Limbaugh, Glenn Dreck and whatzhername, who makes me want to vomit every time she opens her mouth to lie.

And now, we are worried about whether Trump could actually run and get re-elected? Folks, that would be a crime beyond words and when you look at the penis-brained knuckleheads at his rallies, whose eyes are glazed over and whose adulation for the biggest thieving, degenerate liar in American history is palpable, it should certainly remind you of the Nuremberg rallies and the looks on the faces of the German morons with their heiling and adulating for that piece of crap.

Folks, needs a massive kick in the ass, and it needs it now, for to once again have a slime such as Bitch McConnell as President Pro-Tem of the Senate will be enough to destroy the country, which he and his corrupt ilk were on the path to doing.