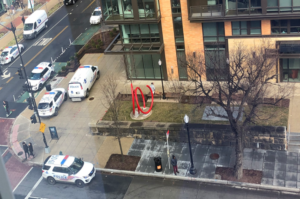 The AP’s Mike Balsamo was one of the first to report on details involving Wednesday afternoon’s FBI raid of an upscale apartment building in D.C.

Federal and D.C. officers/SWAT teams surrounded the Crossing then proceeded to enter the building in tactical formation. The AP reported that the activity is connected to the arrests of two men earlier this afternoon. Allegedly the individuals, Arian Taherzadeh, 40, and Haider Ali, 36, are both accused of “posing as Department of Homeland Security agents and giving actual Secret Service agents and officers – including one on the first lady’s detail – gifts & free apartments,” the report read.

The suspects are being charged with false impersonation of an officer of the U.S., a federal offense. Additionally, four U.S. Secret Service Agents are also under investigation for their possible role in these crimes.

Most unnerving is that the indictment reveals the charade started as early as February 2020 and continued through present day. It further details the gifts the men provided the four agents in question, including “rent-free apartments (with a total yearly rent of over $40,000 per apartment), iPhones, surveillance systems, a drone, a flat-screen television, a case for storing an assault rifle, a generator, and law enforcement paraphernalia.” Furthermore, the indictment claims the pair were in possession of paraphernalia with the insignias of and firearms, including handguns and assault rifles, used by federal law enforcement agencies.

Specifically, it states that Taherzadeh offered to purchase a $2,000 assault rifle for a U.S. Secret Service agent assigned to the First Lady’s protective detail. Federal authorities declined to comment further citing it as an ongoing investigation.

This story is still breaking and an update will be provided as soon as more details are made available.