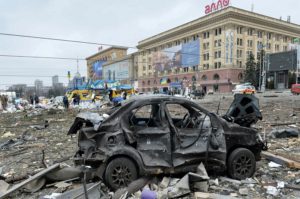 On a very clear day, along the coast from where I was born and brought up, you can see Northern Ireland. It is that close.

If you then travel about 50 miles south, you get to a ferry port that links my country with it. It is the main route for freight and people going between us.

Northern Ireland is 100 years old, having been created in the shadow of the birth of the Irish free State as a recognition, either legitimate or not, that there were many who did not wish to be part of the new Republic. It sits out with Great Britain and our passports recognize its position in relation to us as the passports are for the United Kingdom of Great Britain and Northern Ireland.

Since its creation, there have been two tribes within it. Those who believe that they should remain as part of the UK – the mainly protestant unionists and loyalists – and those who wish to join with the rest of their island as a new United Ireland – the mainly catholic nationalists and republicans.

There has never been an easy peace between them, and the “Troubles” have been once again the subject and focus of a major film – Belfast – where growing up there is exposed at best as quite “tricky”; at worst it was downright dangerous.

The terrorism and atrocities carried out by soldiers of either side led to a desperate attempt at peace in the 1990’s which ended in something called The Good Friday Agreement.

In any short article I can never outline all of the issues sufficiently to allow for people to understand the entirety of the conundrum but let us just say that we have endured the type of peace since signing that Agreement that people of my generation had thought impossible. There are still huge areas of conflict and the politicians on either side still play the types of games that come close to the dangerous policies and projects of the violent past but generally speaking, things are in a good place. They are at some kind of peace.
But we needed help.

The fact is that without the intervention of the United States and unprecedented political contact, without the boldness and the ignoring of traditional boundaries and the immense diplomatic effort, we would still be looking at armed conflict ongoing in the United Kingdom.

But for now, the guns are mainly gone, and the people are without fear of a terrorist atrocity. It has spawned a generation with no memory of that time and they, universally, do not wish to enter a new phase of it.

Of course, many former “soldiers” have found their skills of more use in criminal enterprises than in the political processes but there has been a marked change in how they have been seen – they are no longer martyrs to be applauded but criminals to be condemned.

On St. Patrick’s Day, we over here, heard from President Biden over there a reaffirming of the commitment to the peace process. It was a very welcome note of aid. Biden spoke of too much “blood, sweat and tears” having been shed after the Good Friday Agreement to change it now.

But there is a bitter note that needs no clearer warning than that given by Nancy Pelosi during the White House Gala Dinner. In the UK, we have walked away from Europe thanks to BREXIT. It has led to an issue with the Free State of Ireland as there is only one physical border between the UK and Europe and that is between the North of Ireland and its southern neighbor.

A protocol was established to deal with this, and the unionists/loyalists dislike it. They see it as having their part of the UK in Europe more than in the UK. It has avoided there being a hard border between the UK and Europe which would be illegal under the Good Friday Agreement.

The British Government when working towards us leaving the European Union made great play about us being able to negotiate deals with sovereign nations like the USA now that we no longer had Europe round our necks. According to the news reports over here, “Mrs Pelosi issued a warning to the UK over the Northern Ireland Protocol. She said that if the “border is hardened there will be no UK-US trade deal”. She also warned against any move which “imperils” the Good Friday Agreement.”

It’s a perilous time in the world and what the Good Friday Agreement showed us after 30 years of armed conflict was that you need everyone to sort it and outsiders to smooth the way for it. I hope the world takes heed and the British Government are resolved to take heed also…

The Unco Guid – The smugly pious, could be applied to a Trump supporter prior to the last Presidential election, and now when they are similarly deluded but for a different reason…