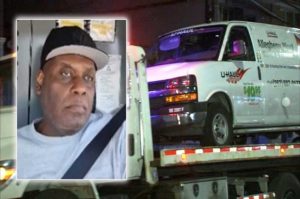 Police have named Frank James as a person of interest related to their investigation of Tuesday morning’s attack in New York City. The subway shooting left at least 23 people injured with ten individuals being shot, and 13 suffering from smoke inhalation during the tragic event. At least five people were suffering critical injuries, and were stabilized at local hospitals. Thankfully, at the time of this writing no deaths had been reported yet.

Frank James, the first named person of interest in the attack, has a history of posting video rants online that express bigoted views, mostly on race and violence. James also expressed a heavily critical stance on New York City’s mayor, Eric Adams (D). He often linked those topics to current events, including the Russian invasion of Ukraine and Mayor Adams’s “policies on homelessness and mental illness.”

Mayor Adams is a former police officer who ran his campaign on the promise to secure one of the largest metropolises in the country from gun violence; a promise now being put to the test.As of Tuesday evening, a $50,000 reward was being offered for any information related to the attack. The city still remained on high alert.

The New York Times reported that Mr. James, 63, has addresses in Wisconsin and Philadelphia. He allegedly rented a U-Haul there that authorities have linked to the shooting.

Per the Times’ report, “Police Commissioner Keechant Sewell said that officers investigating the scene also found a 9-millimeter handgun, extended ammo magazines and a hatchet. They also discovered a bag with liquid believed to be gasoline, consumer-grade fireworks, a fuse and two unused smoke grenades, the authorities said.”

If you have any information leading to the whereabouts of Frank James, please contact local authorities immediately.