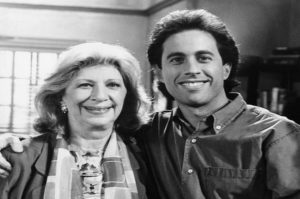 Elizabeth Ann Sheridan was born on April 10, 1929 in Rye, New York. She began her career as a nightclub dancer and singer, and then moved to stage work appearing in Broadway productions throughout the 1970s.

After making the move to Los Angeles, Sheridan’s star was on the rise. She was cast in dozens of film and TV roles. She played Helen Seinfeld on SEINFELD (1989-1998), appearing in 21 episodes. Another memorable role was as the nosy neighbor, Mrs. Ochmonek, on the popular series ALF (1986-1990), appearing in 34 episodes.

Ringside Report sends our condolences to Liz Sheridan’s family during their time of grief.