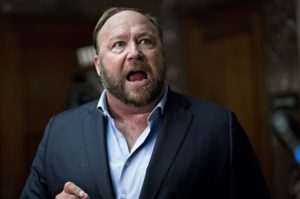 And then there is news that wafts across from the land of the free that partly warms the heart, for the sleekit have proven themselves just so – sleekit. (Definition is at the end of this!)
Alex Jones has filed for bankruptcy.

Having been morally bankrupt for several years, this is welcome news. It shows that there may well be a deity smiling at times upon the world or that karma still does not forget an address. Jones has been responsible for some of the most hideous conspiracy theories which have been espoused without any, and I mean any, thought for the people who are affected by his filth. Perhaps the worst is his touting of the Sandy Hook shooting spree nonsense that it was not real – that he has since recanted is not the point. As he is in court to fight the families of the massacre his site InfoWars seems to be seeking to avoid having to pay out for his spoilt brat outbursts.

He may not have been quite as vile as that appalling woman who chased a survivor of the massacre down the street to “confront them”, but the effect of his peddling creepy rubbish that serves his agenda rather than any form of truth, was the same.

He drew people into a belief system that is then exploited by others but principally is the very definition of disgrace.

Jones claimed that the shooting was a hoax. Parents and survivors have been vilified by him and they deserve recompense of some nature.

What is little known and should be shouted from the rooftops is that people like Jones financially benefit from this spouting of nonsense. People subscribe to hear, and he counts the dollars. The conspiracy business is exactly that – a business.

People go beyond the subscriptions as pejorative merchandise is then peddled which sit on desks, surround overweight stomachs, and adorn caps to provoke outrage and scream to the world I am not a sheeple. Ironic because that is precisely what these people are. They follow mindlessly people they “admire” for their truth and their bravery – qualities they simply do not possess.

You know who I am talking about. They are the people who tell you to do what they can’t – research, refuse to believe anyone who disagrees with them through a petulant and childish smugness that a 5-year-old could penetrate, but you have a life to live and cannot be bothered unpicking it, and they believe that they have a constitutional right to be offensive. Well, you know what? People have a constitutional right to challenge you and haul your ass into a court to show the world what a pathetic little unthinking human you are.

But now Jones seems to be trying to avoid that day of reckoning by providing the world with no case to answer because he has no money.

His luck has run out.

It is therefore bittersweet that a man who believes in the American Dream and shouts about the superiority of the system in which he lives is now caught up in that system and is unable to manage his affairs in such a manner which would make him applauded and admired.

For those of us in the UK, the US seems to be totally in love with money. We are not so much in thrall to mammon, and his attempt to escape the responsibility he has for the disgusting rhetoric he produces is more than unfortunate. But what is much less than unfortunate is a man who thinks the system is superior and shall protect him, is about to find out that it judges him in the same way that others view him – as a pathetic little kid who makes trouble for others and then runs when someone challenges him.

He shall go and hide and hope that he can find a big boy to fight his fights.

The worry, and it is a big worry, is that people shall still believe in him, will see this as a stand he is making on behalf of his brotherhood and continue to support him. And he has plenty of supporters – time to root them out and do the same them as has been done to Jones and hiAlex s filth.

Cleansing can be cathartic for anyone. It is time for a spring clean and Infowars should be the first delete in your bookmarks bar – just don’t replace it with anything of a similar nature…