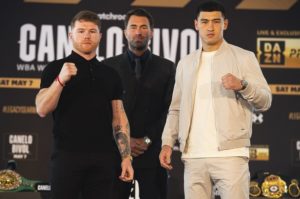 This Saturday May 7th at the T-Mobile Arena in Las Vegas current WBA Super Light Heavyweight Champion Dmitry Bivol, 19-0, 11 KO’s defends his belt against Canelo Alvarez, 57-1-2, 39 KO’s who is moving up in weight to win another world title for his trophy case.

Bivol has been in the pro game a little over 7 years, where he faced decent opposition. However, when it’s matched up against Alvarez, who has been in the pro game now for over 16 years it pales in comparison. During those years Canelo has faced many of the best of his era. He only has loss on his ledger against the fighter of his era, Floyd Mayweather, JR. by a decision. Alvarez’s experience in big fights is the big factor here! The weight which is something that Alvarez should have no issue with because he always comes in over the weight. A game he has been allowed to get away with in many big fights because he is a cheating cash cow for boxing.

Alvarez also has a big edge in punching power. On paper, it is a decent matchup fight fans….

Alvarez  Vs Bivol for the WBA Super light heavyweight world championship it’s definitely an exciting fight to bet on and using this Barstool Sportsbook promo code might just be the cherry on top of this fight betting cake. According to Barstool the odds are favoring Canelo Alvarez at -500 over Dmitry Bivol +380 but keep in mind the current world champion has a 19-fight unbeaten record and near 60% KO average.