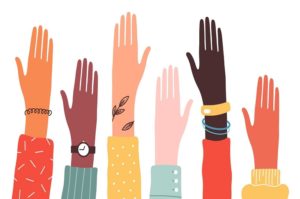 What does being an ally in the fight against racism mean? What if you already feel you are an ally, are there any additional factors to consider? Nicole Asong Nfonoyim-Hara, the Director of the Diversity Programs at Mayo Clinic, defines the act of allyship as “when a person of privilege works in solidarity and partnership with a marginalized group of people to help take down the systems that challenge that group’s basic rights, equal access, and ability to thrive in our society.” I personally like this definition and recognize that allies must also have some degree of power to effect the desired change. Many times, that power is simply their point of privilege which may make someone else listen to what they’re saying.” Achieving racial justice is a marathon, not a sprint. The work to fix what is broken isn’t done until the people who are in the marginalized groups tell us it’s done.

As an ally, you can unite with another to promote a common interest where both of you benefit. It is not about “paving the way” for marginalized groups, but rather the desire to walk the walk with them. Intervene whether women, people of color, or women of color are around or not. Speak up when necessary and explain that you are offended by comments or actions which aren’t acceptable. You may hear comments back like: “I didn’t mean any harm by that.” “You’re blowing this out of proportion.” “You’ll have to learn to be less sensitive.” Assume that your saying or doing the right thing might be questioned but make your stance clear. You don’t have to make a big, grand gesture to be an ally. Anyone with a voice can be an ally and leverage their place of privilege. If someone in a position of leadership also witnessed that same occurrence, they can use their position to hold meetings and trainings addressing these issues, not ignoring the incident.

When this happens, trust gets built in the allies. Trusting in allies to approach more difficult conversations usually takes place after seeing the desire to help even when the experience seemed like it wasn’t a big deal to other onlookers. Sincerity and authenticity in wanting to work towards reducing disparities in BIPOC communities are what keeps these alliances strong over time. An ally can serve as a mentor in predominately white spaces where you know your coworker may have trouble breaking a glass ceiling or doesn’t have a voice that’s being heard. Supportive personal relationships and public acts of sponsorship and advocacy can also enhance the culture of inclusion with marginalized colleagues. Building greater awareness and understanding of how Black and African American communities experience systemic racism in the United States is one way you can begin educating yourself.

Stay informed about how current events continue to affect these communities. Consider how to support those affected as they want to be supported, and then engage with care. Do not let the complexity or lack of comfort deter you from beginning or continuing your journey as an ally. When marginalized groups feel supported and included, they are more comfortable at school and work, thereby ensuring more engagement and more productivity. It lends a hand in creating a more enjoyable environment for everyone. It is not time to retreat to a place of indifference. Remember how book clubs used to be the popular place to discuss “Black pain” and fighting for human rights? Well, it was an ultra-slow route to meaningful activism. I’m sure it felt good to discuss it but what came next after everyone went home? Now it seems social media has replaced this. Once again from the comfort of a chair, people can discuss, through posts, topics like white privilege, white supremacy, and even call out individuals they know need to change. When it’s time for meaningful actions, unfortunately, the pattern of being uninterested in really advancing progress shows itself.

The injustices we protest aren’t just police killings; it lives within housing and school choices; social and professional networks; the defunding of nonwhite organizations; the demotion and firing of Black employees; the microaggressions and slights that happen to us and around us often. Well-meaning, invested people used to gather to talk about books to instruct themselves on how they can do more and do better, but it was not the best being offered as an ally. It is much better to take responsibility for your actions, educate your peers, attend protests and marches, sign petitions, and donate, if you can. Another way to help as an ally is by volunteering your time.

There are always opportunities involving instruction and about Black lives, about humanity, freedom, mobility, happiness, and health since we were first brought here against our will. Think about that. There have always been those who wanted to fight for human rights and were antiracist. Everyone isn’t going to be a frontrunner of movements, but they can help. As Tenzin Gyatso, the fourteenth Dalai Lama, said, “It is not enough to be compassionate. You must act.” Remember, as an ally this is a marathon not a sprint. Renew your commitment to being an ally since it is an ongoing process and the work is still needed to make our world a more inclusive place.