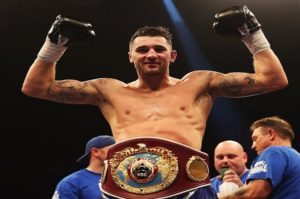 He was the man who lit things up because he had a mathematics degree. He was the man who Tony Bellew loved to hate, before he fixated on David Haye. He was the next best and big thing to come out of Wales and became world champion early on in his career so that the rest of it became overshadowed by his initial achievements. He was a young guy who got out young – he is Nathan Cleverley, 30, 4, 16 KOs.

Active from 2005 to 2017 within the professional ranks his achievements included British, Commonwealth and European titles as well as the WBO light heavyweight title from 2011 to 2013, the WBA – regular – title from 2016 to 2017 and a Batchelor of Science degree from the University of Cardiff in 2010!

Cleverley made his debut in Scotland with a points win over Ernie Smith in Meadowbank Sports Center on the 23rd of July 2005. His rise was rapid and by his 7th fight, on a Joe Calzaghe undercard in Manchester, he was beating the likes of a future British champion in Tony Quigley to earn a lot of attention. His career was being guided by Joe’s dad Enzo so the appearance on any Calzaghe undercard was almost a given but his place as a contender had to be earned; and earn it he did.

In 2008 that meant he was in Las Vegas on the Calzaghe/Hopkins undercard for an 8 round contest against Antonio Baker. He won on points. The focus on a Welsh world champion like Calzaghe was having benefits for Welsh boxing as a whole and the young Cleverley was getting his share of the limelight because of that. Of course, luck plays a huge part in getting you the opportunities but the hard work in the gym delivers the next slice of luck once you are in there…

In September 2008, without having on any belts yet, Cleverley left the Calzaghe stable. With court looming in the fight between the Calzaghes and Frank Warren, the young fighter felt that he could not take any chances with his career and made the agonizing decision to step out to step up.

It worked out well for him.

On the 10th of October 2008, at Everton Park, Liverpool, he picked up the Commonwealth light heavyweight title with a 12 rounds wide points win over Tony Oakey. He claimed after it, that this was just the start of his crown seeking journey, and so it was… In his first defense he stopped Kenyan Douglas Otieno Okola in the 4th round. Then in February defended again, against another Kenyan in Samson Onyango stopping him in the 1st round. He then scored a triumvirate of winning defenses by stopping Billy Boyle at York Hall in the 2nd on the 22nd of May 2009.

On the 18th of July 2009, it set him up for the British title which he took in a 7th round stoppage back at York Hall against Danny McIntosh.

He now had two belts and successfully defended both against a former Commonwealth gold medalist in Courtney Fry on the 9th of October 2009. Back once more at York Hall Cleverley stopped him in the 8th – next was to be the European belt.

Wembley Arena beckoned and on the 13th of February 2010, just prior to gaining his degree, Cleverley knocked out Antonio Brancalion in the 5th round. He was the 11th Welsh boxer to hold the European belt aloft. The world was… waiting… He was just a few days shy of his 23rd birthday.

With the road to the world level opportunities having been fairly straight forward, things suddenly became quite complicated. Having left behind the Calzaghes so that there were less obstacles in his path, he now had some strange and difficult obstacles to navigate.

On the 18th of September 2010, there came an eliminator for the WBO title at light heavyweight. In Birmingham he dealt the blow with a 9th round stoppage of Karo Murat, following medical intervention, to earn him a shot at champion Jurgen Brähmer.

It wasn’t to happen next.

Next came an interim title fight against Nadjib Mohammedi in Liverpool. Cleverley scored a points win against a very awkward opponent and became the interim champion… He couldn’t fight the champion because Brähmer was caught up trying to stay out of prison, defending himself in court over assault charges! If Brähmer had been sent to prison, the belt would have been vacated and Cleverley would have been declared the champion, but Brähmer did not get sent to prison so a shot at the champ must be next? Cleverley was vocal – he would not feel like the champion until he beat the champion.

It wasn’t to happen next.

The fight was signed but then an eye injury in training led to Brähmer pulling out the fight.

Bellew was also competing at light heavyweight, a weight he claimed later on he was “dead at”. Bellew was boiling down to make it and being given the chance to take on Cleverley for a world title, even at short notice, was too good for him to miss. An explosive press conference set us all up for massive disappointment because Bellew failed… to make weight.

Ironically, we would have to wait for that contest but in the meantime an opponent was needed for this defense and Polish veteran Aleksy Kuziemski stood up but was stood down in the 4th. Cleverly was the full champion before entering the ring as Brähmer had been stripped of the title following the pull out. He was now the full champion as he had defended albeit against a last-minute replacement. For some, it still did not feel real. In the meantime there was a very live opponent looking for his chance and unlike with Brähmer we did not have to wait long for the bad blood between Bellew and Cleverley to be resolved.

On the 15th of October 2011, in Bellew’s hometown of Liverpool, in a hard-fought contest, Cleverley won by majority decision. The fight was over, but the debate raged on. It was an ill-tempered build up, followed by a very badly received verdict. Bellew wanted revenge. Cleverley wanted to move on. He now looked like and felt like a full world champion – he was 24.

On the 25th of February 2012, he came back to Wales for Tommy Karpency. Attempts had been made for unification fights, but they were unable to be made against the other champions. Instead, promoter, Frank Warren delivered a homecoming that was a shut-out defense, Cleverley winning 120-108 on all three judge’s scorecards.

Further successful defenses were to follow – Shawn Hawk on the 10th of November 2012 in the Staples Centre in Los Angeles – an 8th round stoppage, then Robin Krasniqi on the 20th of March of the following year at Wembley Arena – another very wide points win where two judges had it as a shut-out.

Back home, in Cardiff he was now a recognized world level operator and his next defense., back at home in Cardiff was to be against Sergey Kovalev. Kovalev was a man who had knocked most of his previous opponents out within the first three rounds but found Cleverley taking him into the fourth. After having been knocked to the canvas three times in the fight, the referee saved Cleverley from any more punishment and called a halt to the fight in that fourth round.

Cleverley had lost his title and retirement for this young man looked the most likely scenario. He contemplated it but there was something out there for him. His name? Tony Bellew.
Bellew had moved up to cruiserweight and on the 17th of May 2014, so did Cleverley when he stopped Shawn Corbin in the 2nd round. He then defended the WBA intercontinental title he won against Corbin on the 12th of July 2014 in Liverpool by stopping Alejandro Emilio Valori in the 4th round.

The stage was set.

This was to be a WBO title eliminator at Bellew’s hometown – again – of Liverpool. It was another decision, but this time, split though they were, the judges gave it to Bellew. The feud was over. It ended as a draw – one win apiece, both by close calls. Cleverley was able to reflect and speak of how he struggled with Bellew at the higher weight and as Bellew was to go on and prove that at this and at heavyweight he was in the right category at last, Cleverley went back down to light heavyweight.

After disposing of Tomas Man in a 1st round knockout, he went over to Chicago to take on Andrzej Fonfara for the WBC international belt. Cleverley was outboxed, but he wasn’t finished. There was something out there for him. His name? Jurgen Brähmer.

The man who had been in the frame to defend his title against Cleverley was out there and ready. This time there was to be no pulling out and Cleverley faced him at the Jahnsportforum in Mecklenburg, Germany on the 1st of October 2016. The belt on the line was the WBA regular title which was held by Brähmer. It was his 7th defense.

At the end of the 6th round a retiral meant that the WBA regular belt was going to change hands. Ironically, given that an injury had stopped the original fight from even getting in the ring, it was an injury, this time to his elbow that halted the fight and saw Brähmer lose his crown.

Cleverley was a two-time world champion. But not for long.

His first defense, against Badou Jack, on the Mayweather/MacGregor undercard saw Cleverley lose by a 5th round stoppage. At the age of only 30, this mathematical graduate had calculated that he had had, enough. He retired and walked away from the sport.

I was gutted. I loved his fights, enjoyed the fact that he had come back and fought the best whilst also managing to fit in the narrative of both Bellew and Brähmer with business finished in both cases. Brave, cultured and an honest pugilist, he was the pride of Wales but also the man we admired greatly.

And then in 2022, someone suggested he might not be done…

In a strange article, posted on the back of some equally strange content in Cleverley’s Instagram account, World Boxing News thinks he might be in the right frame of mind and the world might be ready to see Cleverley back in the ring. A deeply religious man, Cleverley, spending time with his body building girlfriend seems, also appears to be openly smoking enough weed to suggest all is not healthy or wholesome. There’s also been some unfortunate content which would suggest that not having the discipline of the ring may be a massive issue. Getting back to the “program” of boxing might be the solution? Who knows but whatever happens it is the nights he was a boxer that live larger in the mind. Will he return? Well, you never know. It’s not like the sport is unpredictable after all…