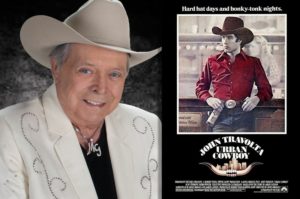 Country singer and songwriter Mickey Gilley peacefully passed away May 7, 2022 in Branson, Missouri, surrounded by his family and close friends. A cause of death was not given. He was 86.
Gillet’s career as a singer began in the 1950 and 60s, playing in clubs and bars and ultimately gained a following at Nesadel Club in Pasadena, Texas. Gilley came into prominence during the 1970s; and in 1974, he recorded the song “Room Full of Roses”. That song put Gilley on national radar, hitting the top of the Country charts, as well as the pop music charts.

Throughout the 1970s he had a string of several top tens and No. 1s, including “City Lights”, “The Window Up Above” and “Bring It On Home To Me.” To bring him crossover success, Gilley developed a new sound, and as a result of that one of his recordings was featured on the soundtrack of the film URBAN COWBOY, starring John Travolta. That song was the country remake of the soul standard “Stand By Me”. Due to the success of the film, the song also became a chart topper on Adult Contemporary and Top 40. Throughout his career, Gilley produced 27 studio albums, and released 41 singles, 20 of which made it to No. 1.

Ringside Report sends our condolences to Mickey Gilley’s family during their time of grief.