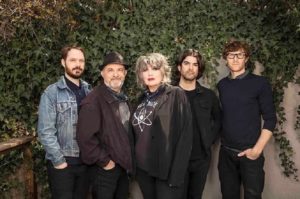 Berkeley, California 1971 … Lisa Brenneis, Dean Chamberlain, Chuck Wada and Martha Davis form a band. They call themselves The Warfield Foxes. Hoping for a recording contract the band moves to Los Angeles in 1975 where Lisa leaves and the names changes to Angels of Mercy and finally The Motels. Two new members join: Richard D’Andrea and Robert Newman. They reject an offer from Capitol Records and the band breaks up for the first time.

Martha Davis decides to reform The Motels in 1978 with guitarist Jeff Jourard and auditions are held: Marty Jourard (Jeff’s brother), Michael Goodroe and Brian Glascock are recruited. In 1979 Capitol Records again offers them a contract and this time they accept. Their self-titled debut album “The Motels” is released four months later. The second single “Total Control” is a hit in France and Australia.

The Second album “Careful” is released in 1980 and the release of the third album “All Four One” in 1982 is simultaneously with the rise of MTV on US Television. Capitol Records creates music videos for both singles “Only The Lonely” and “Take The L” and Martha Davis wins a Best Performance in a Music Video at The American Music Awards.

In 1983 their fourth album “Little Robbers” is released, and it produces the worldwide smash hit “Suddenly last Summer”.

The Motels are touring The US with gigs from 3rd of June onwards.