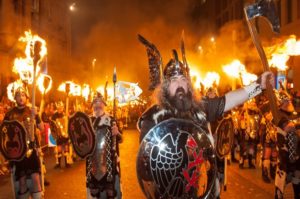 In Scotland, we turn them into culturally iconic moments. There are massive numbers of which are simply trivial to the point of utter banality. But we love them.

I was reminded of one last week when I heard about the POTUS calling for the flying of the flag at half-mast. Why, comes a little later.

Hogmanay, the annual New Year Festivities, were always crowned by a television show that was decidedly Scottish. Fronted by the wonderful comedian, Rikki Fulton, who was a bona fide Scottish institution, each year parties paused to watch his annual sketch New Year’s Eve show on TV, Scotch and Wry. Once it was finished the merits of it, in comparison to previous years was hotly debated.

One year, there was a sketch with a drunk Fulton waking up in the morgue. The immortal line, “I’m in the mortuary, I must be deid,” was uttered before the implications of it all sank in.

Just last week, the United States passed one million COVID deaths. It was for that reason, the POTUS called for flags to be flown at half-mast as a mark of respect. Reeling, rather than drunk, people who have witnessed loved one’s falter and fall understand why that is so little but still late. They suffered the indignity of having been refused the opportunity to say their last goodbye due to restrictions, but they did so to save others. And then they have suffered the struggle to accept people with a grasp of reality that suggests a lack of humanity, who challenged and then ignored sensible rules, whilst they and not I had to endure the pain. Many did so with compelling dignity.

But there remain some…

And they are still there, the hoaxer believers, conspiracy theorists and freedom fighters for the right to believe whatever they think but never who exorcise the right to our freedom whilst asserting their absolute right to exercise theirs. They are still out there…

Freedom is a precious commodity. It is not to be given lightly and it should be exercised with respect. People have a right to it. But people live within a common framework, called a community where that freedom must be exercised with the same level of respect given as demanded. No person is truly an island and we must accept that the exercising of our own freedom will have implications for the freedom of others.

My right to believe may offend. My right to access appropriate healthcare may cost someone else. My right to education may stop another from accessing a school or University place. No matter what the system of government or funding in place for each of these things, and America and the United Kingdom have very different ways of doing each, it is a fundamental and inalienable truth that freedom comes with responsibilities.

With 1 million deaths there shall be many people who shall legitimately ask the question, who is responsible? The dawning reality for many may be that we all are. Not the personal, but the collective we. The election victory of Donald J. Trump prior to the COVID pandemic was a clarion call to people who believed that big government – an idea in the Republican Party that was made populist by Ronald Reagan – was bad and that little government was virtuous. During the 1980’s there was no finesse and there was no legitimate argument offered in response and the Republicans found that if you hammered a message enough then what would happen would be that people got it, believed it and followed it. And it worked then and has done before and since. Ask Josef Goebbels who is credited with originating the theory.

The Trump mal-Administration showed just how bad big government could be. The people seemed to be caught in a nightmare from which they struggled to escape. Each week another revelation about what was going on in the US is greeted in the United Kingdom with a sigh and a shake of the head.

But like the character in the morgue who realized he was not dead; will the people wake up in the mid-term elections enough to realize that you are all part of one movement? You do have the right to disagree with me, and with your neighbors and those at work but whose freedom does that impinge upon and when you vote, consider the implications of the freedom you enjoy. And enjoy it. But do so responsibly… And remember… They are still out there, and they are deid in the heid…

(Kailyard n. a cabbage patch, often attached to a school of writing – the Kailyard School – a genre of overly sentimental and sweet Scottish literature from the late 19th century where sentimental and nostalgic tales are told in escapist tales of fantasy, but here we seek to reverse it by making the Kailyard Observations of effective invective comment from that looks not to return to the past but to launch us into a better future by the one Donald worth believing…)
And today’s Scots word tae bamboozle ye…