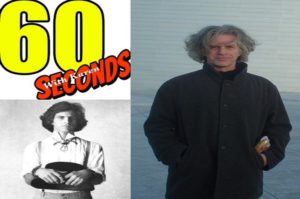 Who remembers the song “Let My People Go -Go” by a band from Kansas City, Missouri called The Rainmakers? They had a string of hits in the late 1980s and early 1990s. It is one of my all-time favorite songs. Check them out when you are in their hometown while they are still performing.

KB: You formed in 1983 as a trio called Steve, Bob, and Rich. Then a 4th musician came, and you changed the band’s name to The Rainmakers: Who came up with this name? What is the story behind this name?

We started out as a cover band. But as we became more of an original / songwriter kind of band, and I was the main writer and singer, I didn’t want to be behind a drum kit anymore, so we added a great drummer, Pat Tomek. We needed a new name, a shorter name, one that reflected the American roots that so much of our music was influenced by. We had several months while we recorded our 1st album to think of names. This one felt right. A rainmaker is a magician of sorts, one who makes things happen without explanation. I think music can be that way. And actually, I’m not sure which one of us put this name on the list of choices. Maybe it just appeared by magic!

KB: In 1986 the self-titled debut album was released with Stephen King quoting lyrics from your songs in his books The Tommyknockers and Gerald’s game: Did you know which songs and what lyrics? How did this make you feel?

My Stephen King story: We had been on tour in Europe for over a month in December 1986 and had just come home for Christmas. We got a call from our agent that Stephen King wanted us to play in Bangor, Maine in early January. So, we took the booking. We travelled to Bangor in a blizzard, played for King and about 200 people in a large arena. After the show he told us he had just put our lyrics in his new book. Sure enough, when Tommyknockers was published, 2 of our songs – Rocking at the T-Dance and Downstream were on the intro pages to each half of the book. Later, in Gerald’s Game, King included lyrics to One More Summer, a reference to The Lakeview Man, and one of the characters reminisced that they had been “singing along with Bob Walkenhorst.” Pretty flattering, and – we’ll ALWAYS be in print!

KB: “Let My People Go-Go” was a big hit in Europe. The biblical lyrics: where are they based on?

In the US, as in many parts of the world, religion and church are such powerful influences on how we see life. I was raised in a fairly conservative small town, Christianity shaping my life in so many ways. But like most people, I reached a point where I had to figure out on my own what I believed – and what I didn’t. Writing songs that questioned religion, poked fun at it a bit, helped me figure that stuff out.

KB: You were especially popular in Scandinavia: How do you explain this? More outside America than inside.

Our albums were released all over the world, but because of some hard-working people at our record company in Norway, some good reviews in the press, and some live shows with great audiences, Scandinavia – in particular Norway – became our 2nd home.

KB: Are you still touring now? Anything new in the pipeline?

We reformed in 2011, made 3 new albums over the past decade, did several Scandinavian tours, and some US dates. But we did a farewell concert in Norway in 2019, just before the pandemic. I feel like we got to have a final chapter for the band that we didn’t expect to have. We thought we were through in 1998. But we got one more chance to have some good travels, play better than we did before, and – most importantly – enjoy each other’s company. We have no plans for another Rainmakers album, and we only play a few shows a year around our hometown of Kansas City.

KB: If you were to make an album with your 7 favorite songs (not your own): Which songs would you choose and why?

Well, we actually did. In 2015 we did an album called Cover Band, where we recorded our favorite songs. They ranged from 16 Tons by Tennessee Ernie Ford, to a couple Dylan songs, America by Simon and Garfunkel, Along Comes Mary by the Association, some old traditional Americana folk songs, Rock On by David Essex. It’s a very fun album, but unfortunately – out of print now.

KB: The songs you have written are very provocative and honest: Is that what makes a song good? When it makes people think?

A good song to me is one that can exist on several different levels. I want a song to be about something interesting, but I also want it to always be fun, even if that “fun” is writing creatively about being sad or angry or confused. I always try to write good lyrics, but people don’t pay attention to the words all the time, so it needs to still be musically interesting.

KB: I read you are a painter too? What are your themes?

There are a lot of musicians who paint and draw. Some as a hobby, some quite seriously and professionally. It’s all the same creative energy, music, and visual art. It just depends on what you pick up first that day – a guitar or a paintbrush. My subjects are fairly traditional – landscapes, portraits, people in unique situations. And – like my songs – I want my paintings to have those different levels of existence and meaning, different places that a viewer can go.