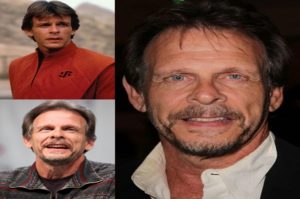 We know Mark as Dar in the Beastmaster movies and as Mike Donovan in the V series, but did you know he is also a classical trained actor in Shakespeare’s work and a musician too?

KB: The audience remembers you best as Dar in the 3 Beastmaster movies: How did you get this role and what appealed to you in playing Dar for all 3 movies?

“The Beastmaster” – Dystopian sword-n’-sorcery stories – alternate histories in alternate universes – were just coming strongly into public consciousness in the days when “The Beastmaster,” was created and I felt I had a good sense of how the leading characters that inhabited them should be played – not only the story, but the history that preceded the film, itself. As a child of the Cold War, I guess I had a personal feeling for the subject matter. Then, too, as a student of Kung Fu at the Seattle Kung Fu Club under the guidance of Grand Master John S.S. Leong, I had a pretty good developing sense of swordplay and – largely thanks to that training and a constitution strong enough to stand up to the rigors of filming in all sorts of weather – I held my own in the stunts. The stunt community – as I’m sure people are aware – is comprised of very sturdy individuals and they appreciated my efforts to contribute as much as I appreciated their generosity in encouraging me to participate. I learned a lot about filmmaking from them, as well, and from the Academy Award-winning director of photography, John Alcott.

But the bottom line is you not only have to know how to act to fulfill the work requirements in this very demanding profession, but you must know as well how to play “the lead,” because playing “the lead” is more than just a title, a paycheck, and a name on the marquee. It comes with the responsibility the title implies – acting in some small way as the acting department’s leader: setting the tone of good cheer and exemplifying a positive work ethic. And in that way, I have always accepted my responsibilities in every company I have had the honor to work with throughout my career, no matter the role or its type.

Tom Hanks’ typically generous referral to me as the reason he became an actor – having seen me live on stage playing the lead in Shakespeare’s “The Taming of the Shrew” – and Chevy Chase’s spoof of “The Beastmaster” in his puffy-muscled eagle wardrobe on the NBC’s tv series, “Community” payed me an irreducible compliment on the one hand, and provided me with a huge belly laugh, on the other. To both, my humble thanks and collegial respect.

Being cast as the lead in the “The Beastmaster,” in fact, had come as a result of the L.A. Drama Critic’s Circle Award for my performance in “Shrew,” and the film’s writer/director, Don Coscarelli, saw that and invited me to meet and discuss his upcoming film. I said I would, and the rest is history. Three “Beastmaster” films, multiple episodes on the TV version as Dar’s mentor, and a directing assignment, as well.

KB: Then came V, the sequel, and the series. I loved those shows. Watched every episode. How did you get the lead as Mike Donovan?

“V” – The television series, “V,” whose creation is rightly attributed in whole and in part to the enormous talents and energies of Kenneth Johnson (creator of “Alienation,” and “The Bionic Woman,” among a long and distinguished filmography-list of others) came to me by way of an offer to meet and discuss the role not unlike that which preceded my involvement in “The Beastmaster.” He had seen my work and felt I might be what he needed for the role of Mike Donovan.

I would say the chief difference in the process of my casting on TV lay in obtaining the approval of the network “brass,” the achievement of consensus of many minds and opinions arrived at, and a common commitment to fully support the ultimate decision. That’s no easy task.

At the time, however, I was aware of none of this consensus-building mechanism (Kenny must have kept me well-shielded from it) but remember only a “midnight meet” like in a spy story with Brandon Tartikoff – NBC exec-in-charge – in a tiny cramped office barely big enough for a desk and a steel file cabinet, in which Kenneth Johnson read all my lines, and then shoved me out the door saying, “Isn’t he (meaning me) great?” Between, “Pleased to meet you,” and “Goodbye,” I never spoke a word. Kenneth Johnson has been my patient friend from then on and one whose boundless generosity continues to this day.

KB: In 1982 you played a blind musician in the movie “If You Could See What I Hear”: How did you prepare yourself for this role? How difficult is it to portray it in such a way that it looks real?

“If You Could See What I Hear” – Occasionally a film comes along like a dream of paradise. Very, very rarely in my experience does the story, the setting, the production company take itself on a vacation in a kind of filmic Eden. But that was how it was on the set of “If You Could See What I Hear.” We filmed in Canada in Peggy’s Cove – a paradise on the rocky Atlantic shores, with seagulls wheeling overhead, the whitecaps white as snow against the deep azure blue of the sea, and laughter in every take, and fresh-caught lobster sandwiches on freshly baked rolls at a dollar-sixty-nine a pop sold out of a little stand by the side of the road. I was never more grateful for holding a Canadian as well as a U.S. passport in my life.

My friend Stuart Gillard wrote the film, a man gone on to Directors Guild Awards and a seemingly timeless and endless career of writing, directing, and producing here in the US, in Canada and abroad, and his work spoke for me, and all on the film. All the cast had to do was go along for the ride. Shari Belafonte was my leading lady and love interest, and the inimitable and brilliant R.H. Thompson my best friend – and who could ask more?

As to the technique of “acting blind” in “If You Could See What I Hear,” I can only say that it produced headaches as a physical by-product of the work, but that its most telling result was an intensity of listening which has never left me since, and insight – which is subject to human frailty, and comes and goes.

KB: You are also active in the theater: Are you a fan of classic plays by Shakespeare? What other playwright’s work would you like to perform onstage?

I began my career as a “Shakespearean” and will remain one to my dying day. All my work is based on Shakespeare’s own, and to the enhancement of that understanding I continue to dedicate what’s left of my time here on earth. In 2017, I produced and performed an evening of Shakespearean characterizations which I named “Hour Shakespeare,” (homophonic pun intended), as it was exactly 60 minutes long (with a half-time break exactly 30 minutes in for the audience to escape). I portrayed fifteen different characters – off book, and as fully realized as a one-person presentation could make them. In 2018 I directed, designed the set, and played Oberon in The Group Repertory Theater’s “A Midsummer Night’s Dream,” the first (and only – so far as I know) correctly interpreted and coherently tied-together telling of that popular story in the last few decades, or perhaps centuries. Groundbreaking in that it was correctly portrayed, blessed by the performance of the wonderful actress, Suzy London – in her monumentally moving (and extremely funny) portrayal of Titania – I was well gratified by the company and our presentation. In 2019 I played the title character in “Macbeth” before what I came to hear were record-breaking audiences in the history of the “Southern Shakespeare Company’s” as then but young existence. Somehow in that time span I managed to lead a six-month acting workshop on how to approach the task of acting Shakespeare correctly, taking its basic curriculum from my 100-or-so page thesis entitled, “The System: How to Act Shakespeare” – which I am looking forward to publishing sometime between now and the time I kick the bucket.

KB: What are your latest movie and TV projects?

Between 2019 and 2021, I managed to squeeze in writing a two-act romantic comedy situated around Alzheimer’s disease entitled, “Gary’s Place,” and a micro-one-act called, “A Knight’s Warrant Trump’s All” – this latter, a restoration spoof with some good swordplay in it, a couple of chills, and hopefully plenty of good laughs, as well.

More recently, I have portrayed a Sheriff in “The Undertaker’s Wife,” and Big Boss Tango in the spoof-ish buddy-cop flic, “Team of Two.” Both are cameos, but I enjoyed the roles and had a great cast and companies to work with and for. So, I guess you could say that although Covid knocked us all sideways, I have managed to remain busy.

KB: How do you spend your time when you are not working?

In my spare time, I write every day, and compose music for the piano. I write songs for guitar, as well, and compose poems – both classical and in the genre known as cowboy poetry – this latter being a hold-over from the days I spent as a kid in Texas, and those I spent on the ranch of the late Chuck Bail, a founding member of the original Stuntmen’s Association way back when, in the days of black-and-white TV. He was a world class cowboy and a fine gentleman, patient with his friend and generous with his knowledge.