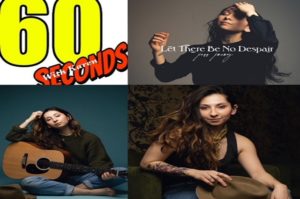 Watch this space as Jess Jocoy is the next big thing in Country Music! She has already released 2 albums during the 2-year long pandemic and has an upcoming album out on 20th of May: “Let There Be No Despair”. She will be touring all through The UK in June and July. Check her out!

KB: I must be honest: I never heard of you before so I started to listen to your newest song “I Will Be Glad” and your voice reminds me of Reba McEntire. Did people tell you this before or am I the first one?

I take that as a huge compliment! I love Reba, so that means a lot. Funny enough, I get Reba quite a bit, Reba, and Stevie Nicks. Both are incredible artists with stunning voices, so I’m grateful for the correlation.

KB: Your debut album “Such A Long Way” was released early 2020 and then the pandemic struck, and you had no chance of promoting the album nor going on tour. A big disappointment. What next?

Despite the world shutting down, I do believe Such a Long Way lived (and is still living) a very successful life thanks to the diligent work of my PR agent at the time, Krista Mettler. Yes, touring stopped; I hadn’t gone on a proper tour before that and had a three-month run set up, but the music was still able to reach new ears and for that I’m wildly grateful.

KB: Same goes for your second album “Brighter Eyes”: Did you write and record it during the pandemic?

Yes and no. Brighter Eyes is composed of songs I’d been sitting on for at least a year, but the title track came in the thick of the pandemic. I knew – or I was under the impression – I’d needed to keep releasing music to keep up momentum, but I was tired and there was just so much uncertainty, I was feeling confused and overwhelmed. While it’s clearer in hindsight, I’m grateful to have kept my retail job throughout the pandemic, but it created a very strange sense of what was really going on in the world, for me. Long story short, “Brighter Eyes” came into existence like a flood, all at once, and was everything I needed to get off my chest at that time.

KB: Who were your favorite singers growing up and are you still listening to them?

KB: Any current artists you would love to collaborate with?

I would love to collaborate with Gregory Alan Isakov! I’ve always liked his music, but I really started to study it in its depth over the last couple of years and its near perfection. Every record, every melody, the poetic ambiguity of his lyrics; it leaves so much room for interpretation but also offers a narrative, too. And it always seems to carry his voice. I want to make music like that.

KB: You have a new album coming out on 20 May: Tell me more about it and why should people listen to it?

I do, and I cannot wait! Let There Be No Despair is a balancing act, of sorts. While not necessarily autobiographical, the stories, I believe, are real; they’re raw and touch on subjects maybe not touched on too often. Be it a song about a woman who can’t bear children, so she stewards a garden of flowers instead, or a song for a survivor of abuse, I believe these songs found me for a reason. I wanted to sing about these things, not to highlight their poignancy, but to validate their reality and offer a sense of hope. I’ve been calling this “a record for the days when life tries to break your heart,” which seems all too often in this day and age, but there’s always good to be found.

KB: What song is your favorite on the new album and why?

If I may be so bold, while this is only my second full-length record, this is the first body of work I’ve made where every song gives me the shivers. I love the production on every song, but I do absolutely adore how “Living In A Dying Town” came out – it’s better than I could’ve dreamt. I’ve had the honor of working with Brandon Bell and Matty Alger who run The Cabin Studio in East Nashville for a couple of projects now, and they’re just so good! Between elevating my vision and leaving space for interpretation, my little work tapes always take on a new breath of life. With Brandon co-producing and the stellar band (Ethan Ballinger, Lydia Luce, Brian Allen, and Matty Alger), I’m blown away by how powerful these songs are when put together into a full body of work…Again, if I may be so bold 🙂