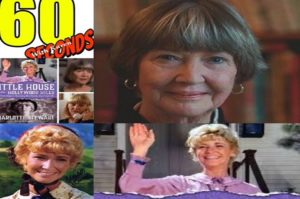 Who remembers Miss Beadle, the schoolteacher in Little House on the Prairie? Actress Charlotte Stewart is 81 now and lives in Northern California. She published her memoirs in 2016 called “Little House in the Hollywood Hills”.

KB: Did you always wanted to be an actress?

Acting never occurred to me…I didn’t have the grades to get into a good school, so I decided to study acting.

KB: You are best known as the schoolteacher Ms. Beadle in The Little House on the Prairie: How did you get this part and what did you like about the role you played for 4 seasons?

I read for the part as any other actress would do… I guess Michael Landon liked my reading.

KB: I grew up with that show on TV: What is the reason, do you think, this show is still so beloved? Is it the simplicity?

It was portrayed honestly for the times it represented. Michael was a family man, and that value was important to him.

KB: You worked a lot with David Lynch: which movies or series and why him? What is so fascinating about him?

I read for David Lynch when he was starting his first film while in film school … Eraser head…It was hard work and long hours, but I appreciated his vision. I guess that’s why he cast me in Twin Peaks!

KB: Anyone you wished you had worked with, but you haven’t and why?

I take ’em as they come…

KB: You published your memoir in 2016: Little house in the Hollywood Hills: This I would love to read. How long did it take you to write it, and where can people buy it?

A friend said I had a lot of interesting stories to tell so he helped me put it together… Send me your address and I’ll mail you a copy. It’s also available on Amazon.

KB: Are you still active in the industry and what are you working on?

I am 81 years old, and the parts are few and I live in Northern California… The travel is awful!

You can purchase her book HERE