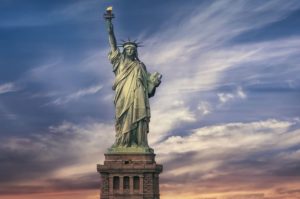 “Not like the brazen giant of Greek fame,
With conquering limbs astride from land to land;
Here at our sea-washed, sunset gates shall stand
A mighty woman with a torch, whose flame
Is the imprisoned lightning, and her name
Mother of Exiles. From her beacon-hand
Glows world-wide welcome; her mild eyes command
The air-bridged harbor that twin cities frame.
‘Keep, ancient lands, your storied pomp!’ cries she
With silent lips. ‘Give me your tired, your poor,
Your huddled masses yearning to breathe free,
The wretched refuse of your teeming shore,
Send these, the homeless, tempest-tost to me,
I lift my lamp beside the golden door!’

That’s the inscription at the base of The Statue of Liberty.

America, is indeed, a nation of immigrants. It’s clear some never received the memo. It seems some are emboldened to scoff at it, generations after their ancestors arrived here as the “tired, poor, huddled masses.”

One of my loves, and something I enjoy doing very much, is assisting undocumented Spanish speaking residents in obtaining legal assistance to begin, continue, succeed in their journey to becoming documented residents, American citizens. I’ll tell you a little secret, too. Those that I’ve met work as hard as they can, accept as many jobs as they can, advertise that they’ll do anything from cleaning your house, shampooing your rugs, washing your car, to landscaping, washing dishes at a restaurant, etc. Whatever they’ve got to do while studying and learning the language, learning how to use the library to learn English and study for their naturalization tests, etc. These folks are as driven as the old time immigrants were. When they arrive, by hook or crook, they don’t mind living in cramped quarters, each family contributing what they can from their many part time jobs to make ends meet for their cramped up, but grateful family. They’re appreciative, grateful and afraid. I’m not talking about “where do I catch the bus and how can I tell the driver to drop me at Main Street?” type of fear and anxiety. I’m talking about, “will I be killed because some white Americans dislike those who have an accent, or aren’t Caucasian?”

At this point, you cannot classify anyone at all, as “different.” We are ALL unique.

There are so many more of “US” than “them.” Us, meaning folks who have newly arrived or those who; like myself, might be any number of generations into the mix and have no ill-will towards anyone else sharing the republic. “Them” describing the minority, aka, racists, uneducated residents who believe they require their own country with their own people, laws, rights or lack thereof.

What these uneducated folks have no idea about are that the old wives tales, wild theories are not based in factual or scientific evidence.

These are the people that need help in reframing those long worn-out beliefs.

If you were to ask me, I’d say that if I were POTUS; FLOTUS; or VPOTUS, during this time in our lives, I would be sitting the ENTIRE REPUBLIC’S POPULATION down for a friendly fire side chat; not only reminding them, but promising them that the next person to disrespect, or show any discrimination of any type, to anyone, will be sentenced to life in prison for “Treason”, for discrimination of The American Way. They’d get life without parole, OR they’d be kicked out of Our Republic and returned to wherever THEIR ancestors came from, PERIOD.

IF they cannot live amongst us, ALL OF US as well as our beautiful diversities, they needn’t.

They can go back to where they all began, before coming to America, just like they did to the DACA folks who were deported to their ancestor’s countries, without any kin there and many times, with zero knowledge of the language spoken there.

My mother was so grateful to come here. Given she had a caramel skin tone, she arrived just in time to be tossed into the Jim Crow abuse. The fact that she was married to a Caucasian looking man, and they both spoke the same non-English languages, my Dad was deemed just as disgusting as my mother’s epidermis was, for being with a woman whose skin tone was (the same color as Caucasians’ when they purposely lay out in the sun, regardless of how little sun their tiny bit of melanin is able to handle).

1. He was with a mixed race woman who didn’t even speak English. Is that even legal? Obviously, they remained in New York and refused to travel South for safety reasons.

2. They BOTH spoke “something else, ugh! Toss them in with those others.” The man can come into this restaurant, but “his ‘N” has to stay outside. That one was a classic story around the tea cup chatter when the grown-ups entertained, as I sucked on a paci, listening wide-eyed and feeling their sadness, regret, confusion.

Perhaps that’s why I grew to champion others and help make the way clear for all.

At this point in life, I think America just needs to get rid of the racists who do not agree that this country is one with dignity, liberty and the pursuit of happiness, regardless of your epi or iris’ color.

One thing is for certain, those of us who are here and CAN reside alongside, respect, honor all neighbors, regardless of where they originated, will be FOREVER BE THE MAJORITY in America, until Lady Liberty sits down.

These are my personal views, opinions and thoughts.

I believe in America. I don’t believe racism belongs here. THAT’S what needs to go.

Neil Diamond wrote a beautiful song about it: “Coming to America.”

That’s it for today, Tweeps.